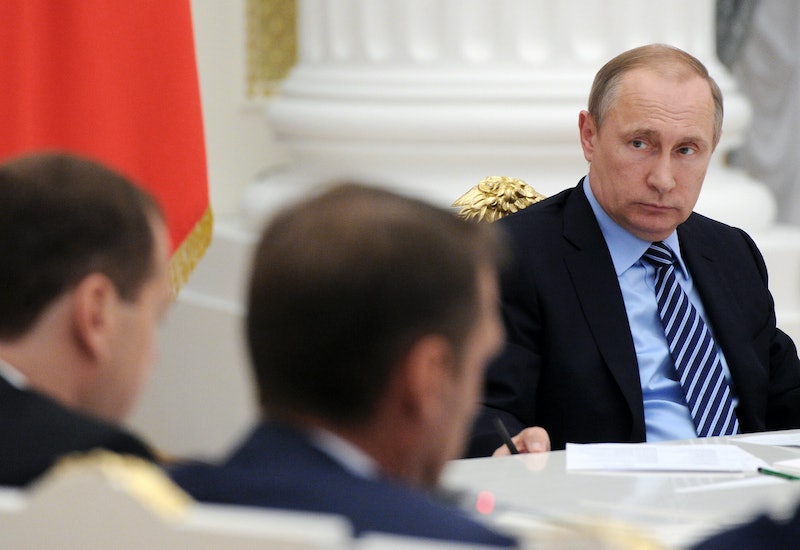 In a curious story that feels like it could have been ripped from the latest season of House of Cards, Democratic National Committee officials are placing the blame for their recent email hack on Russia. The contents of the alleged hack, which were released to the public by WikiLeaks, demeaned candidate Bernie Sanders and seemed to show how clearly the DNC backed presidential nominee Hillary Clinton long before he dropped out of the race. But why would Russia hack into the DNC's emails? Clinton's campaign has an interesting theory.

Sanders' supporters are pointing to this as their long-awaited proof of a rigged system — the emails show top DNC officials discussing how to use his Jewish religion against him, and include talks of planting a story to make Sanders' campaign appear as though it was in chaos. DNC Chair Debbie Wasserman Schultz has since announced that she will step down, and Sanders has received a formal apology. But Clinton's camp is focusing on what they deem the more disturbing part of the leak: the possibility that Russian officials are using the emails as a means to hurt her, and ultimately help Republican presidential nominee Donald Trump win the general election.

In an interview with CNN's Jake Tapper, Clinton's campaign manager, Robby Mook, asserted that, "Experts have said that it is the Russians that, in fact, went in and took these emails."

When Tapper asked for a possible motive, Mook replied:

...Experts are now saying that the Russians are releasing these emails for the purpose of actually helping Donald Trump. I don't think it's coincidental that these emails were released on the eve of our convention here. ...I think we need to be concerned that we also saw last week at the Republican Convention that Trump and his allies made changes to the Republican platform to make it more pro-Russian. And we saw him talking about how NATO shouldn't intervene to defend — necessarily should intervene to defend our Eastern European allies if they are attacked by Russia. So, I think, when you put all this together, it's a disturbing picture.

Though skeptical, a report from Vox also offered this up as a motive for a possible Russian hack. They cited Trump's tendency to be "curiously pro-Putin," and likewise pointed out that his campaign manager, Paul Manafort, previously advised the pro-Putin leader of Ukraine, Viktor Yanukovych. Reportedly, Manafort helped secure a Republican Party platform that would not come down hard against Russia's activities in Ukraine.

For his part, Trump has denied the whole thing, calling the allegations a joke.

Whatever the case may be, it will be interesting to see what repercussions the hack will have on this week's Democratic National Convention.