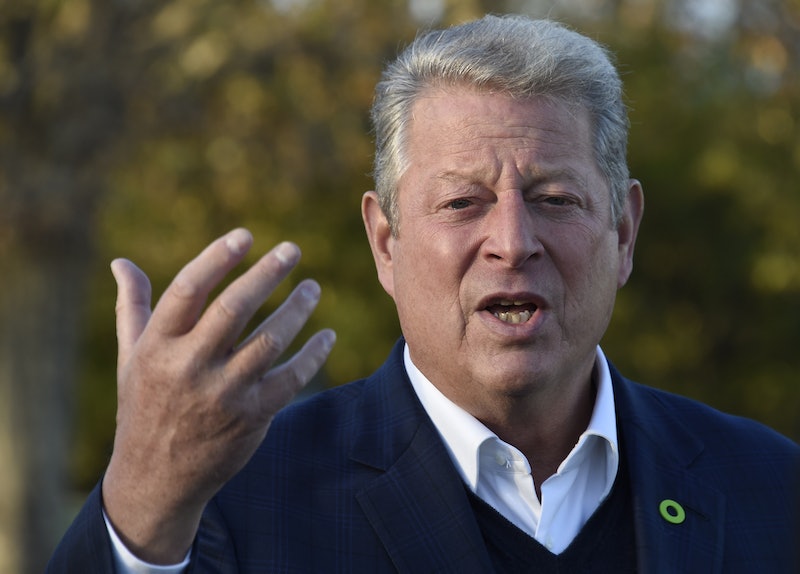 With the Democratic National Convention kicking off Monday night, all eyes are on who will be attending the event in Philadelphia. However, who's not attending the convention — where Hillary Clinton will accept her party's nomination for president — is also noteworthy. So who's not en route to the City of Brotherly Love today? Well, according to Politico, former Vice President Al Gore hasn't endorsed Clinton, and isn't attending the DNC this week. Considering how Gore has yet to endorse this election's presumptive Democratic nominee, it is not too surprising that the former vice president will not be in Philadelphia. But the question is, Why hasn't Gore endorsed Clinton? Considering his ties to the Clinton family, this question is particularly pertinent.

Though it may not be a widely-remembered political fact anymore, after serving as a congressman and senator from Tennessee, Gore spent eight years in Washington as Bill Clinton's vice president. That's why it's surprising that Gore has not endorsed Hillary Clinton during her campaign for the presidency, and will not be in Philadelphia at the DNC. Clinton has received endorsements from countless Democratic politicians, and according to Politico, Gore's spokesperson suggested last fall that, while the former vice president would not be endorsing a candidate in the primaries, he would at least endorse his party's nominee.

However, it seems as if Gore is focusing on issues other than the 2016 election. Though Politico reported that he will not be at the DNC because he has "obligations in Tennessee," it's no secret that the former vice president spends most of his time bringing awareness to climate change and environmental issues facing the Earth. Gore is one of America's most well-known environmentalists. However, it's clear that Gore is not avoiding endorsing Clinton because of doubts that she would not support his environmental activism. In fact, Politico reported that Gore thinks Clinton would support his fight to end global warming, and stated in 2014, "I don’t have any doubt that her heart is in the right place on [climate change] and that she would like to be an agent for positive change on the issue."

So is the former vice president simply too busy saving the Earth to take the time to endorse Clinton? Well, possibly. However, there are other reasons Gore may not be endorsing Clinton. According to Politico, Gore has a complicated relationship with the Clintons, one which began during his vice presidency. Politico suggested that Gore and Hillary Clinton's fraught relationship began when President Bill Clinton tasked his wife with instituting universal healthcare in the United States — an important job that could have been carried out by the veep.

2016 is not the first election during which Gore has distanced himself from the Clintons. Politico explains that when Gore ran for president in 2000, he tried to keep voters from associating him with Bill Clinton due to the Monica Lewinsky scandal. Furthermore, Gore didn't endorse Hillary Clinton during her 2008 campaign for the presidency.

The former vice president's absence from the DNC is also not unprecedented. According to Politico, Gore skipped the 2012 convention in Charlotte, though he did speak at the conventions in 2004 and 2008. Oh well, it's Gore's loss if he misses a surprise performance of Hamilton at the DNC this year.