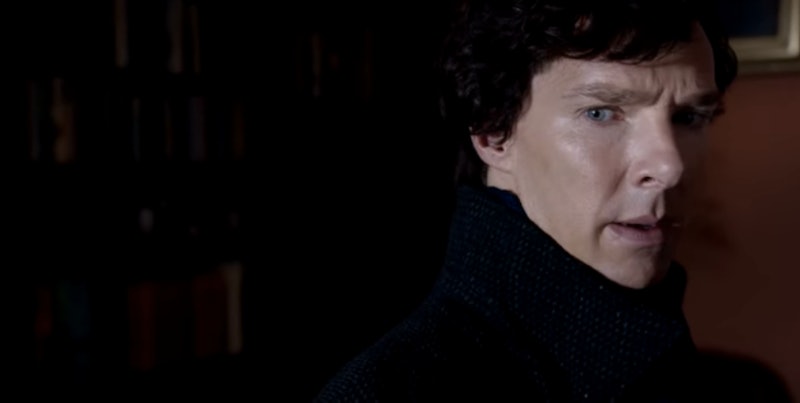 Finally, finally it's time for me to start speculating about everyone's favorite mystery show, as the Sherlock Season 4 trailer is finally out in the world. One of the most interesting things that we're being told so far about Season 4 is that it will by no means be all sunshine and roses for our heroes. In fact, according to co-creator Mark Gatiss, who also stars in the show as Mycroft Holmes, "It’s no spoiler: We explicitly said it is the darkest season yet and still obviously full of laughs and fun, but is generally tonally dark." He shared that little tidbit at Comic-Con this past weekend, and, after watching the trailer, my brain is swirling with what that might mean.

Obviously there's been a lot of buzz about Andrew Scott's Professor Moriarty returning, but I haven't entirely figured out what that would entail. Whatever it is, I suspect it has a lot to do with the element of darkness that we've been warned about. Specifically, my theory is that a significant portion of Season 4 will actually take place inside Sherlock Holmes' head, and that the characters we think of as living, breathing villains might actually be creations of his own imagination. We saw a little sneak peek of that inner world and those inner demons with the Christmas Special, which seemed as though it was taking us back in time as a standalone episode, but was actually a drug-induced fever dream of Sherlock's. It brought up a whole host of questions, but answered none of them satisfactorily, priming us to come into Season 4 exactly where and how the creators want us: questioning everything.

We've had three seasons of being able to trust Sherlock's deductive reasoning explicitly, so it's the perfect time to start throwing us some curve balls, and undermining that relationship. Which is apparently exactly what they've started to do in this trailer.

The thing that stuck out to me the most was all the medical themes — we see nurses, people screaming at Sherlock to take things seriously, and Mycroft intoning, "The roads we walk have demons beneath, and yours have been waiting for a very long time..." All of these things hint to me that Sherlock might be in some sort of treatment facility, struggling against something, whether a mental illness, an addiction, or something I haven't even considered. Take a look at the trailer below, and see if you notice the same patterns.

It's definitely a possibility, right? Wouldn't that explain the themes of darkness that Gatiss and the rest of the SDCC panel were pushing? We've all been having a great time exploiting Sherlock's absurd intellectual capacity, but what if they've brought him to some sort of mental break? We rely on him, but how much can we really trust him? It would be an intriguing theme to address in the fourth season, and I think Benedict Cumberbatch and Martin Freeman have proven by now that they're more than up to the acting challenge that it would represent.