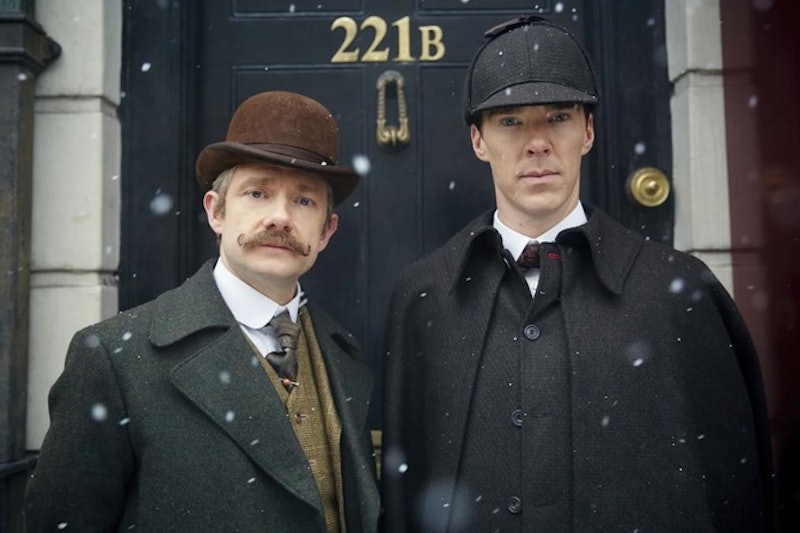 Some things are well worth waiting for and I think we can all agree that Sherlock's fourth season fits firmly within that category. While it's true that we still have the Christmas special "The Abominable Bride" to help satiate our sleuthing appetite, our deductive skills are working overtime trying to figure out everything we can about the upcoming season. Whether its regarding returning cast members or Sherlock Season 4 plot spoilers, we'll take any sort of information we can get about our beloved detectives. But if you're anything like me, it can sometimes be difficult to keep track of all the important details that continue to make their way to the surface, which is why I thought it would be helpful to compile everything we know about Sherlock Season 4 thus far. That way we have all the necessary information in one place.

Now, of course, additional pieces to the puzzle will continue to leak out throughout the coming year, but this post will still serve as a great jumping off point in regards to what we can expect from the fourth installment once it makes its grand debut. So if you're in need of a little Season 4 refresher, check out the roundup below and get pumped for what could very well be the best season yet. (Which, let's be honest, would really be saying something.) The game is on!

1. All Of The Main Stars Are Returning

Aside from Benedict Cumberbatch (Sherlock) and Martin Freeman (Watson), fans can also look forward to seeing the likes of Amanda Abbington as Mary Watson, Louise Brealey as Molly Hooper and Jonathan Aris as Anderson. It'll be the Sherlock reunion we all want and need.

2. The Theme Will Be "Consequences"

During an interview with Entertainment Weekly, Steven Moffat described how Season 4 will be different from what fans have seen in the past:

[Season 4] is going to be… I suppose you’d say… consequences. It’s consequences. Chickens come to roost. It’s dark in some ways—obviously it’s great fun and a Sherlock Holmes romp and all that—but there’s a sense of… things… coming back to bite you. It’s not a safe, sensible way to live. It’s hilarious and exhilarating some days, but some days it’s going to be bloody frightening.

3. Viewers Will Be Desperate For More

In that same interview, Moffat also remarked that fans will be "desperate for series 5." Though I don't know how that will be different from any other season, honestly. We always crave more Sherlock.

4. It Will Be Centered Around "The Red-Headed League"

Back in February, Mark Gatiss tweeted an image of Jabez Wilson's pawnshop with the text reading: "We Gingers must stick together...#Sherlock." And considering that the character Jabez Wilson is introduced in Arthur Conan Doyle's story of "The Red-Headed League," I'd say that's a pretty big hint that it'll be the main focus of the season.

5. It's Set To Start Filming In April-ish

The sooner the better, I say!

During the Sherlock panel at Comic-Con 2013, Moffat made it clear that Sherlock's ultimate nemesis really is as dead as he seems. "Moriarity is dead. He shot himself in the face. What more do you want?" Though given the epic Season 3 cliffhanger, they could just be Jon Snow-ing us.

7. There Will Be No Doctor Who Crossover

Those of you who have been holding out hope for an eventual Sherlock-Doctor Who crossover had their dreams squandered earlier this month when Gatiss told Entertainment Weekly that a crossover episode would happen “over my dead body.” So I wouldn't hold my breath for that one.

Last year, Freeman spoke with UK's Telegraph and hinted that Mary's fate on the show could still take a grim turn like it does in the books. “While we play fast and loose with the original stories, we generally follow the trajectory of what Conan Doyle did," Freeman stated. "So he [Watson] gets married, and then Mary dies - so at some point presumably she’ll die." Get those tissues ready, folks!

In other words, the waiting game is officially afoot. God speed, everyone!

More like this
Netflix Shut Down 'Bridgerton' S3 Rumours About A “Very Dark” Storyline
By Bustle
'Succession' Season 4 Will Be An "Absolute Banger" According To Cousin Greg
By Bustle Staff
This 'Gossip Girl' Wardrobe Error Has Gone Viral On TikTok
By Alyssa Lapid
'The Last Of Us' Has Officially Been Renewed For Season 2
By Darshita Goyal
Get Even More From Bustle — Sign Up For The Newsletter
From hair trends to relationship advice, our daily newsletter has everything you need to sound like a person who’s on TikTok, even if you aren’t.