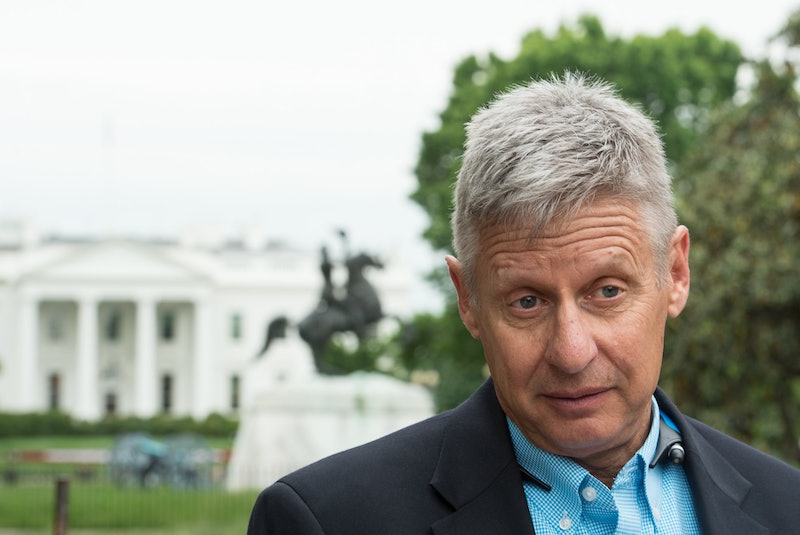 As the American public grows increasingly wary of the two-party political system, Libertarian Party candidate Gary Johnson has billed himself as a viable third option. Though he's been often overlooked as the Republican and Democratic parties confirmed their nominees this month, the former governor of New Mexico did manage to make some press during last week's Republican National Convention in Cleveland, Ohio. Will Johnson be at the Democratic National Convention to likewise rile up liberal voters who are discontent with their party's nominee?

Overall, Johnson has been noncommittal about the whole affair. In an interview with Morning Consult during the RNC, he answered a mere "maybe" when asked if he would be attending the Philadelphia convention. So far, none of his social media accounts confirm his attendance.

He told Morning Report that his focus is rather to present himself as a third option. And in order to do so, he has to first court the attention of the media: "The opportunity is with the media, and the media is going to be asking the same questions there that they’re asking here. What do you tell a Republican voter? What do you tell a Democratic voter?" The most important thing, he says, is to tell Republican and Democratic voters that he can get into the upcoming debates.

And perhaps he can. In order to secure a slot in the upcoming general election debates, Johnson would have to average out at 15 percent of support in five national polls, as selected by the Commission on Presidential Debates. According to a report by CBS News, Johnson enjoys 11 percent of nationwide voter support. Should he be able to push that number up to 15 percent by the debates in that and at least four other polls, he would reach the needed threshold to automatically win a place alongside Hillary Clinton and Donald Trump on the debate stage.

Interest in him appears to be on the rise, too. The Hill reports that Google searches for "third-party candidate" rose by 1,150 percent during the RNC. Johnson has also racked up some celebrity endorsements. Comic Drew Carey publicly announced his support for the candidate during a fundraiser he hosted for Johnson over the weekend. Johnson also received two official endorsements from Republican state representatives on Monday.

So whether Johnson chooses to attend the DNC or not, it looks like he could stand a fair enough chance as a Libertarian candidate in the upcoming election. If voters see him on the stage with the Democratic and Republican candidates, he could properly make the case for a third party.