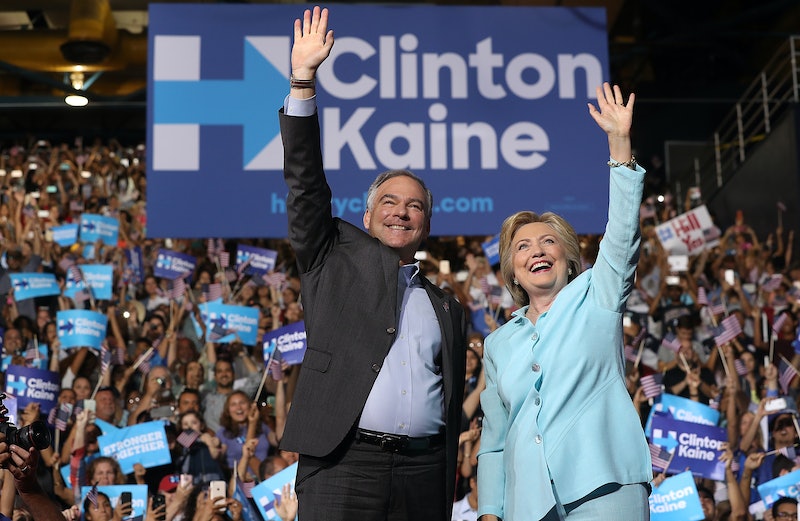 Presumptive Democratic presidential nominee Hillary Clinton announced (at long last) her VP running mate on Friday: the “boring but safe” Tim Kaine. The Virginia senator and former governor was seen by many as a tepid offering — a straight white man from a Southern state — in a year in which progressives have had a powerful voice in the party. Indeed, other names on Clinton’s shortlist included Labor Secretary Tom Perez, New Jersey Senator Corey Booker, and Massachusetts Senator Elizabeth Warren, all of whom would have made for the first time a major party put forward a presidential ticket in which neither candidate was a white man.

Specifically, many liberals took issue with Kaine’s position on abortion, which is, let’s say, complicated. A practicing Catholic, Kaine has a “personal objection” to abortion, but said he believes “that matters about reproduction and intimacy and relationships and contraception are in the personal realm.”

For my money, Kaine might be the Glee of reproductive politics. Allow me to explain.

There’s little I dislike as much as the television show Glee. I find the storytelling forced, the acting disingenuous, and the songs little more than thinly veiled capitalist ploys. Even its central gay character (I didn’t make it past season one, though I’ve been led to believe there were others) I found stereotypical and therefore unrelatable.

And yet, there’s evidence that, along with shows like Modern Family and The New Normal, the series helped speak to anti-marriage-equality viewers, and ultimately helped turn the tide of popular opinion on same-sex marriage. I didn’t like it as a TV show, but I appreciated what it had done in terms of destigmatizing same-sex relationships for Americans who didn't have the regular opportunity to interact with LGBTQ people in real life. In a time when we’ve become less and less likely to come into contact with people whose political opinions we disagree with, Glee became a vehicle through which those who were uncomfortable with LGBTQ people became normalized to them. This was not in the least thanks to including both gay characters and the people around them who struggled to understand and accept their sexualities.

Kaine has the potential to do the same for those who oppose a woman’s right to choose. He represents a model for how someone pro-life is able to understand how his own personal religious beliefs might differ from his wider political beliefs. True, this will do nothing to please or energize the party’s progressive base, who will have no patience for someone who had to evolve on abortion.

But I’d wager that Clinton is hoping that Kaine will help her attract moderate voters who are turned off by Trump, but find the Democrats too pro-abortion for their comfort. What Kaine offers them is a model for how to balance their own personal views with their larger political objectives.

Whether this gambit will work remains to be seen. Regardless of Kaine's selection being decried by many (not the least of which is news comedian Samantha Bee), he’s still being talked about as a progressive. And it seems likely that the pool of pro-life voters who are up for a difficult, nuanced examination of their political beliefs is rather small. But perhaps that’s what makes Kaine’s selection so novel: He’s not an exclamation point, he’s a “So…”

Just as Clinton tried to be in the 2008, Kaine’s the beginning of a conversation, not the end. But then again, we all know how that turned out.

More like this
Yes, Billboard Queen Angelyne Really Ran For Governor Of California
By Brad Witter
Watch Benedict Cumberbatch Lead An ‘SNL’ Medieval History Lesson On Roe v. Wade
By Grace Wehniainen
Cardi B Explains To David Letterman Why She Uses Her Star Power For Politics
By Jake Viswanath
10 Times Diana & Meghan Spoke Similarly On The Royal Family
By Sophie McEvoy
Get Even More From Bustle — Sign Up For The Newsletter