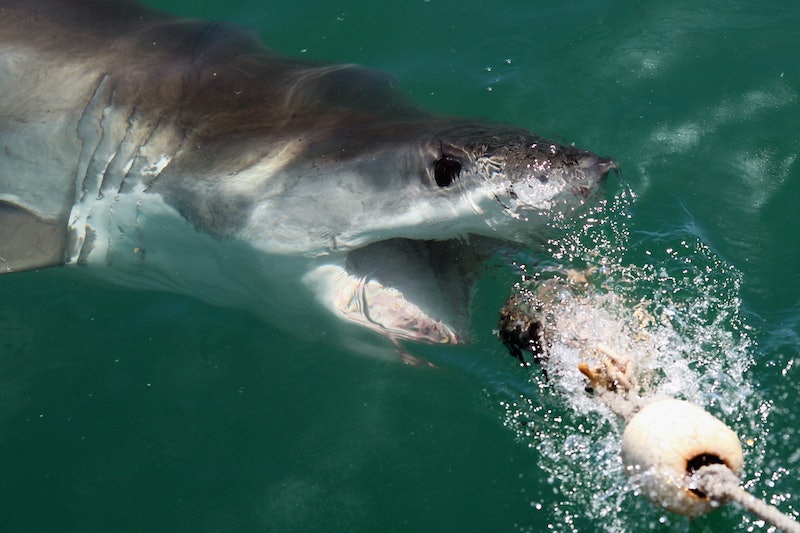 Considering the massive popularity of Discovery's Shark Week and the ongoing saga that is Syfy's Sharknado franchise, nothing can convince me pop culture isn't completely obsessed with sharks — which explains why Syfy is airing its own week of shark-filled programming, including the 2012 Halle Berry-starring film, Dark Tide. But, like me, you may be wondering if Shark Alley from Dark Tide is real as well as all those other pesky details like where it is and can you actually swim with sharks there.

Well my shark-loving friends, I can inform you that Shark Alley is real, in fact, and is located off the coast of the South African fishing town Gansbaai. Now, while I doubt you'll run into Halle Berry down in Shark Alley or any millionaire businessmen demanding to swim with the sharks in open water without the protection of a cage, some of what Dark Tide portrays about Shark Alley is true. However, it isn't quite as dangerous as Dark Tide may have you believe — largely because no one is allowed into the water without a cage unless they obtain a specific permit that is only granted for research or filming. So, no reckless businessmen are hopping into the sharks' feeding ground. But, what exactly can the average person do in Shark Alley?

According to Marine Dynamics, the sea channel known as Shark Alley features cage-diving for those who want to can get up close and personal with the marine predators who call it home. Shark Alley itself lies between Dyer Island, a protected bird sanctuary home to African Penguins, and Geyser Rock, where a colony of Cape Fur Seals reside. The seals act as a food source for the sharks, particularly Great White Sharks, who are most active in the area during Gansbaai's winter months, May - August.

In addition to the penguins, seals, and sharks, the coastal area is also home to dolphins and whales. With the help of Shark Alley, Gansbaai has become a tourist destination and local businesses offer other types of nature sight-seeing, including whale-watching, plus hiking on the mainland area. Whether you visit Shark Alley for the opportunity to cage-dive with sharks, or you're looking for slightly less dangerous fun, Gansbaai has you covered.

So, while Shark Alley may not be quite the horrific scene that Dark Tide presents (though it can be scary since sharks are extremely dangerous predators), it does provide a unique opportunity for those who are interested in sharks to learn more about the marine creatures — and maybe meet one face to face.

More like this
Everything We Know About 'Love Island' 2022 So Far
By Sam Ramsden
The 10 Best Cat Puzzle Feeders
By Lauren Moison
My Picky Eater Dog Absolutely Devours This All-Natural Food
By Allison Berry
If You Have Pets, You Probably Don't Realize You're Making These Common Mistakes
By Mackenzie Edwards
Get Even More From Bustle — Sign Up For The Newsletter