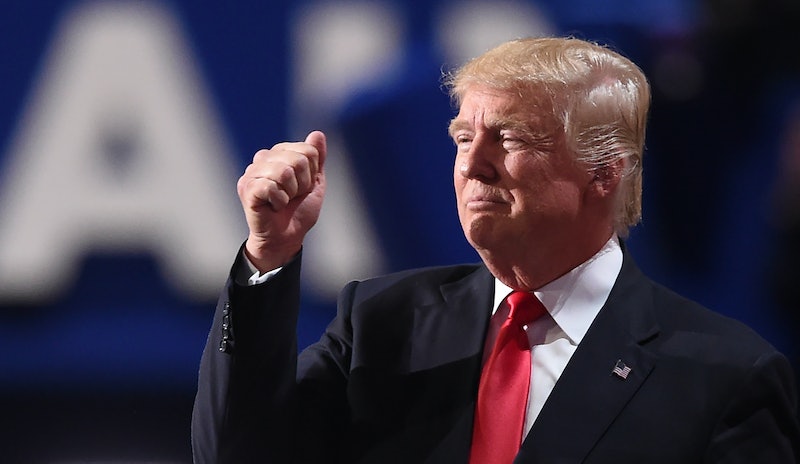 Do you have any burning questions for GOP presidential nominee Donald Trump? We've all seen the former reality TV star on news networks giving interviews, and discussing his policy platforms, but maybe you have a few questions of your own. Maybe you want to know more about his plans to create jobs in America, or you're wondering how he's going to fund the deportation of 11 million immigrants. Whatever questions you may have, on Wednesday you can ask Trump a question directly via his Reddit AMA. Here's how.

Trump will be holding an "Ask Me Anything" forum on Reddit on Wednesday night, and users will be invited to ask the candidate anything they want. According to the official announcement, the Reddit thread will go live at 6:30 p.m. ET, and Trump will sign on at 7:00 p.m. ET to respond to questions. Of course, interestingly enough, Trump's AMA session will be taking place at the same time that President Obama and Vice President Biden are scheduled to speak at the Democratic National Convention.

The AMA will be held at "r/The_Donald," which is a designated site for Trump supporters. According to Breitbart, if you plan to participate in the conversation, you'll have to sign up for a Reddit account and visit the r/The Donald thread to ask anything of the GOP nominee.

The fact that the Trump campaign scheduled the event to take place at the same time as the DNC — and specifically the night that Obama and Biden are scheduled to speak — is curious, but unsurprising. Trump has already taken attention away from Clinton's convention by focusing on the recent WikiLeaks Democratic National Committee email dump and its implications for Bernie Sanders' campaign. Specifically, Trump has taken to Twitter to call out former DNC chair Debbie Wasserman Schultz and "Crooked Hillary" for the content of the emails.

On Monday morning, Trump tweeted, "Here we go again with another Clinton scandal, and e-mails yet (can you believe). Crooked Hillary knew the fix was in, B never had a chance!" He then praised last week's RNC, and wrote, "Wow, the Republican Convention went so smoothly compared to the Dems total mess. But fear not, the dishonest media will find a good spinnnn!" (Mind you, Trump's convention had its fair share of contestation.)

Come to think of it, it might be interesting to sign on to Trump's AMA and ask him why he tweets so much. The conversation will get started on Wednesday at 6:30 p.m. ET.