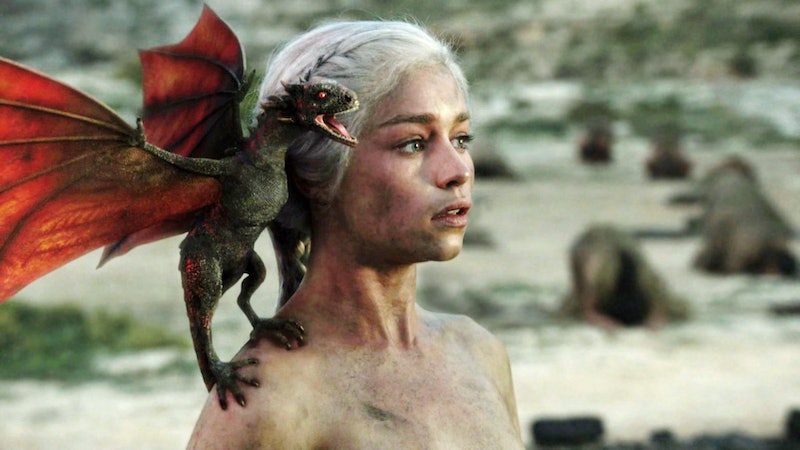 You know how it is: one minute you're riding a dragon high above the mountains of Pern, or traversing the perilous Mines of Moria, or working on your homework for Wizarding School, and the next minute you look up from your book and realize you've missed your bus stop. Fantasy novels can be addictive, and no one will ever understand the struggles of a fantasy reader. You're always a few pages away from a world of adventure, magic, and eating stew in inns. But it's not all pet dragons and talking trees: there are some definitely struggles, too.

After all, as a fantasy fan you've probably had to defend your favorite genre more than once. Or, at the very least, you've had to patiently explain the differences between fantasy and sci-fi (hint: if there's a map in the front or anyone named Angus, it's a fantasy novel). People will try to tell you that fantasy books aren't "literary" enough, or that goblins can't be fully-realized characters. And then there are all those different fantasy cultures to learn about, and the different laws of magic in all the different fantasy universes, plus an internet full of fan theories and role-playing games—being a fantasy reader is a full time job. So here are some of the trials that all fantasy lovers must go through:

1. When a location isn’t on the map in the front

I'm a sucker for a good fantasy map. It's a handy reference when you need to remind yourself of the distance between the Dark Citadel and the Mountains of Madness or whatever. But sometimes your favorite gang of scrappy fantasy folks roll up to a town/city/mysterious abandoned temple that's not on the map. And then you have to sit there and wonder where they are (I'm looking at you, Daenerys Targaryen).

Fantasy names range from the manageable (your Jons and Bilbos) to the difficult to pronounce (your Xaro Xhoan Daxos'). Sometimes you have a really solid pronunciation in mind, but then you watch an interview with the author and it turns out to be way off. Big shout out to those authors who take pity on us and stick a pronunciation guide in the back. Side note: it took me years to realize that "Eragon" was just "Dragon" with an "E."

3. When every fantasy world is based on Europe

Look, Fake Fantasy Europe is a fun place. You've got your vaguely British knights, your sort of Scandinavian barbarians, and a bunch of elves all over the place. But Europe is not the only continent in the world. We can only read about so many Tolkien-esque, Anglo fantasy worlds before we're ready to snap. Good fantasy is imaginative, not just derivative. So when we do find a brilliant fantasy novel that isn't set in faux medieval Europe, it's all the more magical.

4. When people imagine every fantasy character as white

And even if a fantasy novel IS set in *fake* Europe, that doesn't mean that all the characters have to be lily white. If anyone ever tries to give you some B.S. reasoning about medieval Europe and historical accuracy, kindly remind them that dragons, mages, and elves are also "historically inaccurate." And then assign them 500 pages of N. K. Jemisin to read.

5. When the TV show/movie gets it wrong

The trouble with translating fantasy novels to the big screen is that fantasy novels are usually very involved. They're long. The various fantasy cultures are complex. And movies or TV shows are inevitably going to get something wrong somewhere along the way. What I'm saying is, all of us are still a little hurt that Nearly Headless Nick's death-day party didn't make it into the movie.

6. When you need to keep flipping back to the glossary

Even the most die-hard fantasy fan gets a little confused every now and then. Luckily, a lot of fantasy authors have thought ahead and given us a handy glossary in the back, so we can remind ourselves what "farmling" means, or who Maester Aemon is, or whether or not wizards exist.

7. When you can speak a fictional foreign language better than a real one

You know you're a serious fantasy fan when you can read more words in Elvish or Dothraki than you can in Italian or French. You weren't even trying to learn a new language—but now you're pretty sure you can ask for a bathroom if you ever get stranded in Middle-Earth.

Do I remember who Archduke Ferdinand was? Not really. Do I remember the basic economic structure of Ankh-Morpork from Discworld and the events leading up to Aegon's conquest of Westeros? Oh, yes. Being a fantasy reader means having a permanent repository of mostly useless facts (but boy is it fun to bore your friends who've only seen the Game of Thrones TV show).

9. When you remember that magic doesn’t actually exist

There's nothing worse than being deeply entrenched in a battle for the cosmos, and then realizing that your lunch break is over and it's time to go back to work. Unfortunately, science has yet to find a way to replicate unicorns, dragons, and the other staples of a good fantasy read. But it's still a bit of a shock when you return to the real world and remember that you're not really studying at the Earthsea school of wizardry.

10. Waiting for that next book to come out

A lot of the best fantasy novels come in series. And, no matter how much we all harass George R. R. Martin, writing a book series takes time. So sometimes you just have to wait to find out if the kingdom is going to be saved or if the forces of evil are going to rise again. Good thing there are plenty of other fantasy series to get started on in the meantime.

11. When non-fantasy readers hate on fantasy

Everyone's allowed to have their own genre preferences. But some people seem to think that gives them permission to hate on fantasy readers—and that's just not fair. Just because a book features dragon-riders or a map of some kind of haunted forest, doesn't mean it's silly. Plenty of novels can involve goblins and still have literary merit. So try not to let the haters get you down. They don't know what they're missing.