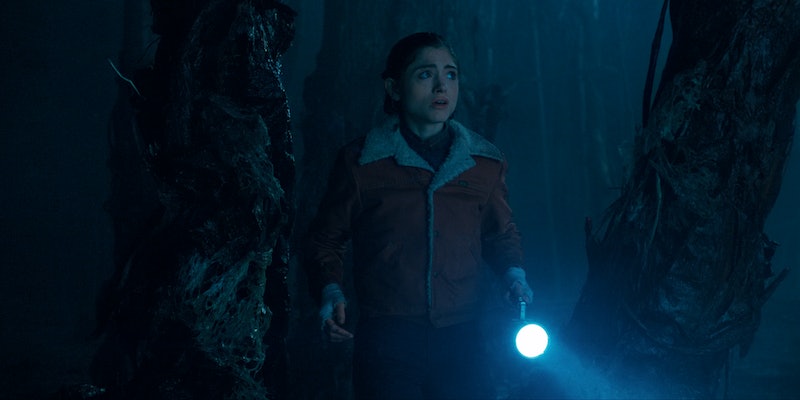 The first season of Netflix's 80s throwback series Stranger Things has been nothing short of a phenomenon, coming out of seemingly nowhere with a cast of mostly unknown actors and a creative team with few other major projects under their belts. However, despite the fact that everyone seems to be talking about Stranger Things, there are still some mysteries about the world that have yet to be solved. Like, for example, are the Monster and the Wall Slime the same thing, or two sides of a similar coin?

Many of the show's mysteries lie within the disturbing parallel universe known as "The Upside Down," which seems to have only two inhabitants: The Monster, referred to by some characters as the Demogorgon, and an indescribable sort of wall goop that seems to be alive and that covers nearly every surface in The Upside Down. But where does one end and the other begin?

Many of these mysteries will have to wait for a possible second season on Netflix, but the shows creators' revealed in an interview with Variety that they already have all the answers.

Even with the Upside Down, we have a 30-page document that is pretty intricate in terms of what it all means, and where this monster actually came from, and why aren’t there more monsters — we have all this stuff that we just didn’t have time for.

While fans don't know yet what the relationship between the monster and the wall slime is, there are plenty of possibilities that the show can explore in Season 2.

Possibility 1: The Wall Slime And The Monster Are The Same

Possibility 2: The Wall Slime And The Monster Are Different

The Wall Slime and the Monster are both native to the Upside Down, but just because they're the only things in the Upside Down doesn't necessarily mean that they are one and the same. The Wall Slime seems to be attracted to portals from one world to the other. The Slime itself seems more akin to an odd alien fungus or plant than whatever animal-like lifeform the Monster is, and it's possible the Monster's travels through dimensions simply create wall slime in its place. Besides, the Wall Slime seemed to have its own agenda with throat slugs and whatnot.

Possibilty 3: The Wall Slime And The Monster Are Different, But Work Together

This might be the most likely possibility and allows the writers the most to explore in Season 2. The Monster seems to be taking people from the real world and, instead of eating them, feeds them — or does something similar — to the omnipresent wall slime. When Will is rescued by Joyce and Chief Hopper, he's being held up by the slime with some extra-gross tentacle lodged down his throat. If the Monster and the Wall Slime are separate entities, it's clear that the Monster needs something from the Wall Slime. Otherwise, there's no reason for the Monster to try and keep it well-fed.

There are no easy answers regarding the Upside Down except the answer to the question "Is it really creepy?" (The answer being, of course, "Very.") While the creative team behind the show clearly knows what the deal is with the Monster, the Wall Slime, the throat slugs, and all the other weird parallel dimension happenings in Stranger Things, fans won't get those answers until there's a Season 2. Until then, maybe don't go into any weird, gooey portals that appear in trees in the middle of the woods.