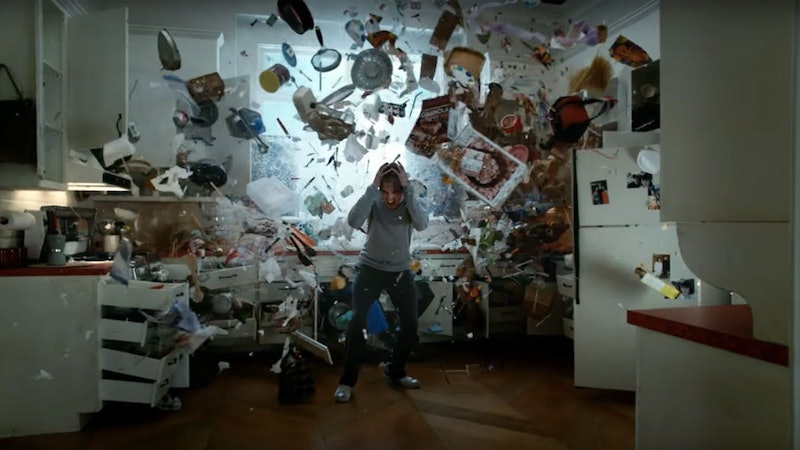 At the recent San Diego Comic Con, some of the biggest buzz surrounded the release of trailers for such highly-anticipated franchise films like Wonder Woman, Justice League, Doctor Strange, Kong: Skull Island, and King Arthur: Legend Of The Sword. With the built-in brand awareness and hundreds of millions of dollars on display, it's easy to see why these teasers grabbed all the attention and headlines… and why it was relatively easy to miss one of the most exciting — and certainly one of the strangest — promos of them all: the first official trailer for Legion , the new series coming to FX this fall.

What is Legion, you ask? That's an excellent question. On paper, it's a very confusing show. It's based on a Marvel comic series, but it doesn't take place within the Marvel Cinematic Universe. Its protagonist is a mutant, but it doesn't feature any of the X-Men. Created by Noah Hawley, also the creator and showrunner of FX's acclaimed anthology series Fargo, and starring Downton Abbey's Dan Stevens, Legion tells the story of David Haller, the son of Charles Xavier (aka Professor X), an antihero with dissociative identity disorder and a wide range of telekinetic, pyrokinetic, and other superpowers — each of which is controlled by a different manifestation of his fractured personality.

Does it sound weird yet? Well, it's about to get even weirder, since the newly-released trailer proves that Hawley's next effort is going to be even crazier than anyone expected. Case in point:

For audiences who are most familiar with the British actor from his performance as the charming (and ill-fated) Matthew Crawley on Downton Abbey, the sight of Stevens as a schizophrenic mutant is likely to raise a few eyebrows.

Then there's the former Parks And Recreation star as Lenny, "David's friend, who despite a life of drugs and alcohol abuse, knows that any day now her life is gonna turn around, which gives Lenny the likeable energy of the impossible optimist despite her rough demeanor," according to a Marvel press release about Legion . (Side note: I can already tell it's going to be tricky to determine which characters are real and which are only part of David's split personality.)

As David lies hunched over a table, the person sitting across from him flickers in and out of existence. A hallucination? Another mutant? David's bifurcating identity?

Oh, you know, just some random people going about their daily business at the bank — except their all walking nonchalantly backwards. Is David reversing time? Or just going crazy?

Hawley recruited this Fargo Season 2 star (who played the doomed Simone Gerhardt) to play Syd, who is "Self-sufficient and street smart," according to Marvel, and who "uses her sharp and prickly demeanor to protect her soft core, because even though it makes her a sucker and puts her at risk, she still believes in happily ever after."

As Bruce Springsteen sang, "And when we kiss, ohhh, fire!" Indeed, when David and Syd lock lips, the world turns upside-down and there's a massive explosion. A metaphor for the intensity of their passion? Or a literal energy exchange caused by two super-powered beings coming in contact with one another?

"She didn't disappear," David insists to his interrogator Hamish Linklater (The Big Short). "She took my place, and I took hers." Is Legion secretly a remake of Freaky Friday? Which one's Jamie Lee Curtis and which one's Lindsay Lohan?

Like they say, you can't make an omelet without breaking some eggs — and some dishes and some drawers and and your refrigerator and quite possibly your entire house.

For those uninitiated in the lore of Legion, the first hint of the show's true nature doesn't come until almost a minute into the teaser, when David starts making this pen quiver with his mind and someone says, "He may be the most powerful mutant we've ever encountered." More than anything, these two syllables set the FX show apart from the Marvel Cinematic Universe, which isn't allowed to utter the word "mutant" because 20th Century Fox — and not Marvel Studios — owns the film rights to the X-Men franchise.

About halfway through the trailer, things take a break for this very odd dance sequence featuring both a smiley Dan Stevens and also apparently that man innocuously pretending to be a shrub behind him. I can't even.

One more Fargo alum makes an appearance in the teaser: the recently Emmy-nominated Smart (aka Season 2's Floyd Gerhardt) as Melanie, "A nurturing, demanding therapist with a sharp mind and unconventional methods," according to Marvel.

Heads up! Three soldiers shooting at a group of people are taken out by a falling car or tank or some other vehicle that in any case is definitely not supposed to be plummeting out of the sky. Apparently the lack of X-Men will not translate to a lack of super-powered action.

Kitchens aren't the only things that David can blow up, as he proves by exploding this poor innocent table. I guess he's done with the interrogation, guys.

Not until the very end of the trailer does Legion's tenuous ties to the X-Men universe become apparent, as the "O" in the title resembles not just the mutant team logo, but also cleverly the wheel of Professor X's (aka David's father's) wheelchair.

There's no specific premiere date set for Legion yet, but the trailer announces that the series will debut sometime in "Early 2017." So you have at least six months or so to brush up on the "Legion" comic book storyline before the adaptation hits the small screen next year.