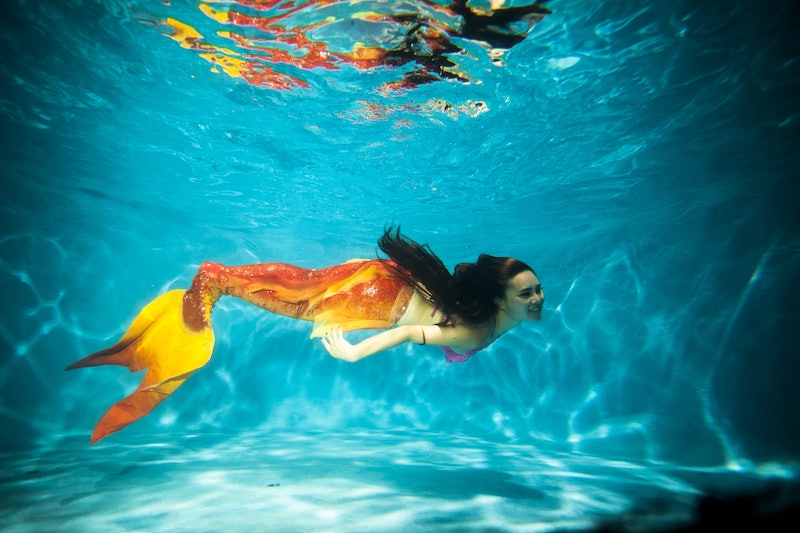 There are a lot of scary things that live under the sea. In between sharks, piranhas, and whatever that fish with the light bulb above its head was in Finding Nemo, there are plenty of reasons to fear what lies beneath the deep blue. Now, Freeform's potential new series is introducing viewers to something else terrifying that lives in the depths of the water — though you may be wondering just why the heck we should be afraid in the first place. As reported by TVLine on Monday, Freeform has just ordered a new pilot about mermaids called The Deep, and these sea people are definitely not like the ones who sing in Disney's The Little Mermaid — because they sound way, way more terrifying.

According to TVLine, the mermaid tale will be "reinvented" for The Deep, and the new series will be "violent" and explore themes of "obsession." TVLine has teased a little bit about the plot of the new show as well, which will involve the "battle between man and sea" which starts when "predatory beings return to reclaim their right to the ocean." These predatory beings are seemingly what we know as mermaids, though they seem to be more in line with threatening supernatural entities like vampires or werewolves than the Disney-fied version that gave us Ariel.

Though The Deep may seem like a strange take on mermaid mythology, it's actually friendlier versions of the tale that are newer to pop culture. Hans Christian Andersen's tale of The Little Mermaid — the story upon which the Disney movie is based — tells a darker tale than the one we're used to. In the original version, the Little Mermaid has her tongue cut out, making her unable to speak, and is encouraged to stab the Prince in the heart when he doesn't fall in love with her. (She chooses suicide instead.) It's not the only dark interpretation of mermaids: according to Wired, European mythology often portrayed mermaids as "siren-esque beasts that dragged men into the inky-black depths." Quite different from the story in which Ariel will do anything to become "a part of our world."

Though we won't know if The Deep will go to series for some time, this creepy interpretation of the mermaid myth could make for one seriously unsettling TV show, one that bucks our expectations of these half-fish creatures. Like Ariel, I'm already curious to visit this world.