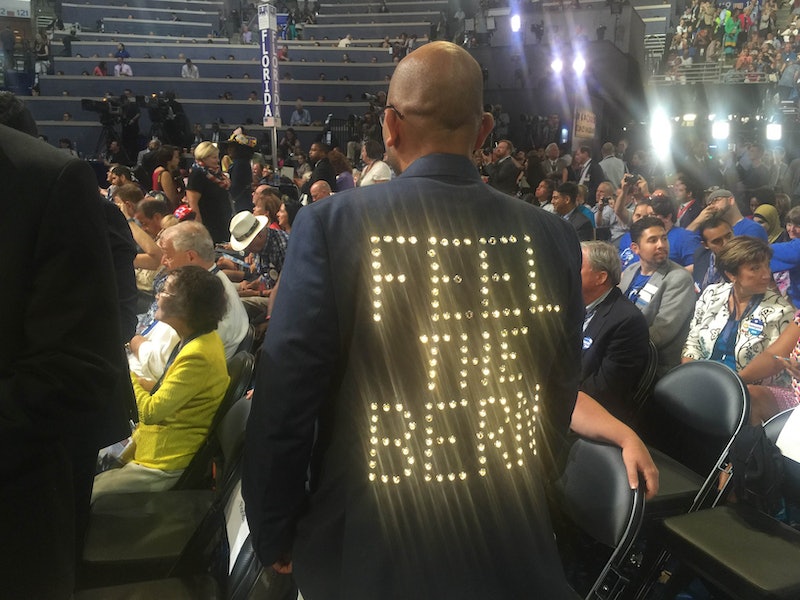 Conventions of all stripes are always sure to draw interesting characters, and the Democratic National Convention is no exception. At this year's DNC, we got to meet Bernie Sanders delegate Sanjay Patel, whose "Feel The Bern" jacket lights up. All eyes were on Patel as C-SPAN's cameras kept panning to him during Sarah Silverman's speech. Not only is Patel's DIY jacket really cool — he also has a lot to say about Sanders, Debbie Wasserman Schultz, and Hillary Clinton.

Patel is a Sanders delegate from Satellite Beach, Florida, and says that despite it only being the first day of the convention, he'd already run into some surprises — namely, seeing Wasserman Schultz, the former DNC chair who resigned after leaked emails alleged the committee favored Clinton, at the Florida delegation breakfast. When asked about Wasserman Schultz, her appearance at his delegation breakfast, and the alleged scandal that led to her resignation, Patel was unequivocal in denouncing her:

It's nothing new that we didn't know, but to have them prove it was really kind of despicable and I feel that in any other position, in any elected office or corporation, you do something like that and you walk out the door or you're sent to jail, so for her to show up, it just feels disrespectful.

That being said, Patel adds that he's not quite ready to support Clinton, who is slotted to become the party's official nominee. He says he wouldn't vote for Clinton "right away," but leaves the possibility open to interpretation.

He adds that many Sanders supporters share similar sentiments, and that blindly asking for unity without making efforts to appeal to voters isn't helping the party. As an example, the delegate begins discussing the Democratic platform meeting, drafted in Orlando earlier this month, in which an amendment about carbon taxes unified Sanders and Clinton supporters. According to Patel, Clinton later reneged on this amendment.

When it comes to party unity, Patel offers some sage advice that the Clinton campaign might heed: merely calling for unity "doesn't unify anything." He says former Sanders supporters want to feel as if they're "not picking the lesser of two evils," and that he's still waiting for that final push that will convince him to vote for Clinton.

Patel tells Bustle that he created his DIY jacket with the help of his wife and a friend, and that it's another example of the "outpouring of love" they feel for Sanders, whom they've been supporting for over a year. He calls the Sanders movement "beautiful," and said he experienced so much love among his fellow Sanders supports — a feeling he clearly hoped to bring to the DNC.

The DNC is just getting started, but may have already found a rising star in this passionate, thoughtful and well-spoken delegate from Florida.