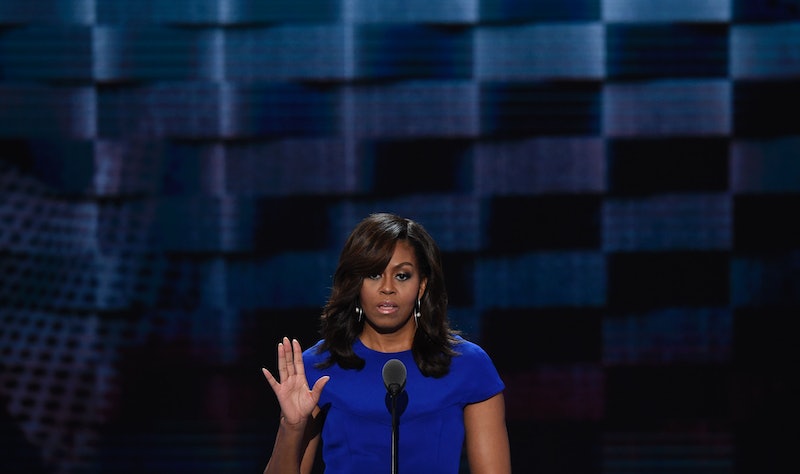 On the first evening of the Democratic National Convention, Michelle Obama delivered one quote that may have defined the night, setting the tone for the first family's push to vote another Democrat into office. Whereas Republican nominee Donald Trump implies that America isn't good enough, Obama spent her time focusing on the ways America has improved over the past century. She described Clinton's commitment as one that's dedicated to furthering change.

The story of generations of people who felt the lash of bondage, the shame of servitude, the sting of segregation, but who kept on striving and hoping and doing what needed to be done so that today, I wake up every morning in a house that was built by slaves, and I watch my daughters, two beautiful and intelligent black young women, playing with their dogs on the White House lawn.

Providing her own powerful anecdote as a black woman in America, she fearlessly reminded the nation that the White House — a symbol of Americanism and liberty — was built by slaves. She went on to paint a beautiful picture by describing how her own black daughters now play on its lawn. In fact, she pointed out, there isn't anything stopping them as women from becoming president of the United States — if Hillary Clinton wins in November, she will set that precedent.

And make no mistake about it, this November when we go to the polls, that is what we're deciding. Not Democrat or Republican, not left or right. No, in this election, every election, it's about who will have the power to shape our children for the next four or eight years of their lives.

The First Lady herself has been a strong advocate for the health and wellbeing of American children during her husband's two terms in the White House. Entwining the causes she holds so close to her heart, she told Americans that their children aren't doomed to the allegedly violent future that Trump spent so much time describing during his RNC acceptance speech. Instead, she implied, the people should never discount the country's accomplishments, especially in the realm of social and civil rights.

On that same note, the First Lady refused to tiptoe around the racially charged crises currently happening in the United States. Speaking on the hopes and dreams of both law enforcement officials and the protesters that are fighting to shatter racial profiling, she attributed a socially progressive, egalitarian attitude towards the Democratic Party and Clinton. That willingness to admit that racial discrimination still exists posed a sharp contrast to the attitude at the RNC, where some speakers promoted "Blue lives" only. Overall, her message was one of hope and during these divisive times, America needs that more than ever.