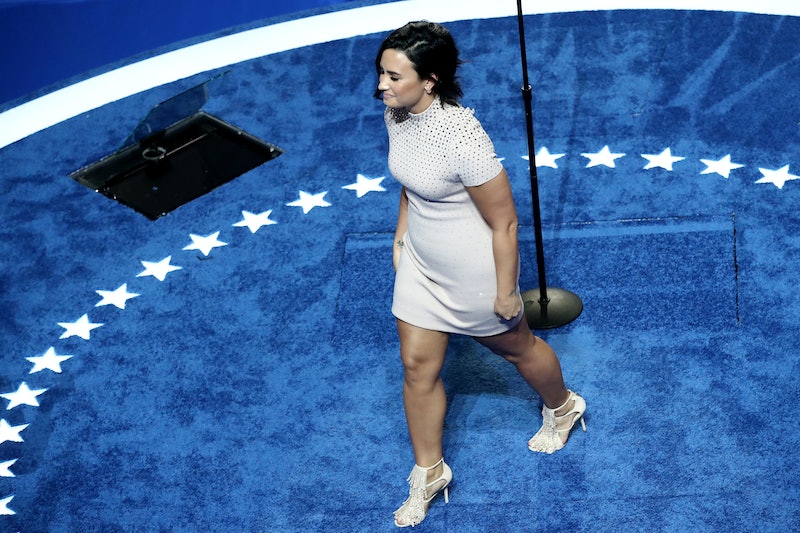 Beginning the busy week with a heartfelt address, this one Demi Lovato quote about mental health reminded politicians that it should never go unaddressed. In a speech at the Democratic National Convention, the singer openly referenced her own experience with mental illness, allowing others who have had a similar experience to relate with her. She offered important food for thought about the current state of our country's mental health and urged all Americans to take it seriously:

Like millions of Americans, I am living with mental illness. But I am lucky. I had the resources and support to get treatment at a top facility. Unfortunately, too many Americans from all walks of life don't get help, whether they fear the stigma or cannot afford treatment.

Lovato talked about the devastating effects mental illness can have on a person, and how many people are unable to get the kind of treatment she was able to afford. It's that contrast between the "haves" and "have-nots" that was not only exemplified in Lovato's points about mental illness, but was also highlighted in many other DNC opening night speeches. From Elizabeth Warren's narration of her Oklahoma roots, to Michelle Obama's discussion of why children are essential in this election, Monday's DNC stage was lit up by women who know that class matters — and Lovato's discussion of her luck (and the misfortune of others) further enriches that theme.

Like Lovato, I also live with mental illness. I was diagnosed with PTSD as a teen and depression while in college, and know all too well that my insurance coverage and therapy-affirming parents were privileges that many others simply don't have. Lovato didn't mention it in her speech, but Donald Trump has a poor track record when it comes to mental illness and the disabled: he once made fun of John McCain's status as a prisoner of war (which, of course, left him with wartime PTSD, from which I also suffer) and also mocked a disabled reporter (though he insisted that the comments weren't about the reporter's disability). These are but a few quotes in the very long laundry list of Trump comments from before and during his presidential bid, but they serve as a stark reminder not only of the character of the man who aims to lead our country, but also of the presiding view of the mentally ill and disabled — that we are flawed, damaged goods and don't deserve the same respect or consideration afforded to others.

I agree with Lovato when she said that this issue is not about politics. It's about human rights, the right to be treated decently and at an affordable cost. Lovato's quote — and the primetime spot in which it was delivered — shows that the cultural conversation is finally shifting towards treatment rather than stigmatization, and in our current cultural climate, it's a sigh of relief.