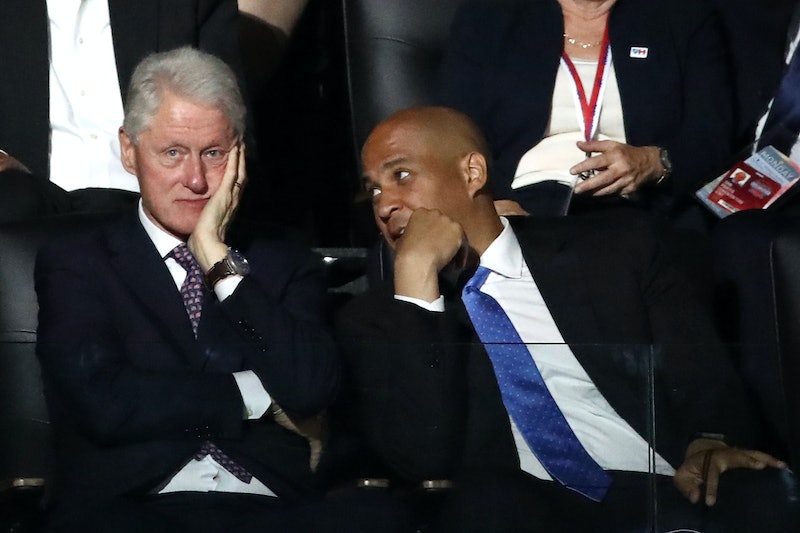 As is to be expected, the first night of the Democratic National Convention has already provided us with ample quotable, meme-able, and GIF-able moments. From Sarah Silverman's vamping (and telling off the #BernieOrBust crew) to Elizabeth Warren calling out Donald Trump's "stupid wall," Monday's speakers were as popular on the DNC floor as they were on social media. One such moment was, thankfully, captured by an ingenious camera person. Video from the DNC shows that Bill Clinton's reaction to Michelle Obama's Twitter comment was priceless.

When discussing the type of person she wants for president, Michelle was unequivocal in both her support of Clinton and her denouncement of Trump — and did so without even mentioning his name:

And when I think about the kind of president that I want for my girls, and all of the children, that's what I want. I want someone with the proven strength to persevere. Someone who knows this job and takes it seriously. Someone who understands that the issues the president faces are not black and white and cannot be boiled down to 140 characters.

While the FLOTUS's jab at Trump was serious, it was also lighthearted enough to elicit a laugh from former president Bill Clinton.

This wasn't the first time cameras panned to Bill for reactions. Earlier in the night, he was seen veritably fawning over Cory Booker during his speech as well, which caused a hilarious stir on Twitter — which was refreshing compared to the half-joking, completely terrified way people were discussing Chris Christie's Clinton witch hunt last week.

Michelle Obama was as full of grace and poise as ever, and Bill was as hilarious as we'd expect. Here's hoping he doesn't develop a crush on her (or Booker, for that matter). The Clinton's don't need any more scandals.

More like this
The Queen’s Reaction To Helen Mirren At The Windsor Horse Show Was Utterly Priceless
By El Hunt
The Best Memes & Tweets From The 2022 Met Gala
By Olivia Rose Ferreiro
8 TikTok Pasta Recipes To Try Out At Home
By Emma Garza
On TikTok, Miley Cyrus’ “Malibu” Is The Soundtrack Of Growth
By Courtney Young
Get Even More From Bustle — Sign Up For The Newsletter