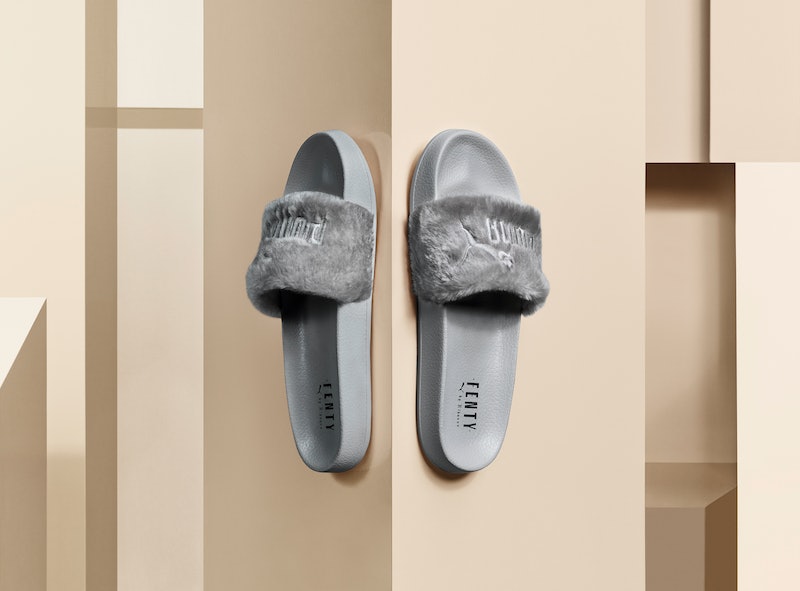 There are two #ByeMoney moments on the horizon for shoe lovers in the next two weeks. You probably haven’t even recovered from the news that Rihanna is releasing an orange camo print version of Puma Creepers on July 28 and she goes and does this! Rihanna is dropping grey Fur Puma Slides on August 5. This new shade joins a previously sold-out trio of Fur Slides, which includes black, white, and shell pink pairs. Where can you get the grey Rihanna Puma Fur Slides?

The newest shade of the Fenty By Puma Fur Slide will go on sale at Puma stores, Puma.com, and other select retailers. Yes, this footwear looks like a glam shower shoe, but it's so much more than that. The Puma Fur Slides add a dose of fashion-forward "oomph" to any basic, errands-running ensemble. Grey really is such a wonderful shade for this silhouette, too.

The grey Rihanna Puma Fur Slide will cost around $80. In addition to the grey slide making its global debut, the original black, white, and shell pink Fur Slides will be restocked at select retailers, according to the press release that Bustle received. So Friday, August 5 will be full of Rihanna Fur Puma Slides.

Grey is good! You can totes wear these with an all-black ensemble or with jeans and a white tee. I nabbed a pair of the black Rihanna Puma Fur Slides back in April 2016 and I can honestly attest that the shoes are crazy cozy and comfy. I wear them all the time and for many occasions — while traveling, running errands, going to the movies, and more.

There's also further good news regarding Rihanna and Puma. According to the same press release, there are other new releases coming later this season.

Let's take inventory of what's going on. We are ready for the debut of the orange Camo Creepers, the premiere of the grey Fur Slide, a restock of the black, white, and shell Fur Slides. Now, we have a hint that other shoes could be on their way.

The Rihanna x Puma collabo is a hit in any and all styles, from sneakers to slides.

Behold the Fenty Camo Creeper. It's such a looker. Remember, it drops on Thursday, July 28.

Puma and Rihanna are acutely aware of what works with footwear. They refuse to disappoint fans, customers, and sneaker pimps with their offerings.

Make a reminder in your calendar or your phone now — the grey Fur Slide lands on August 5.