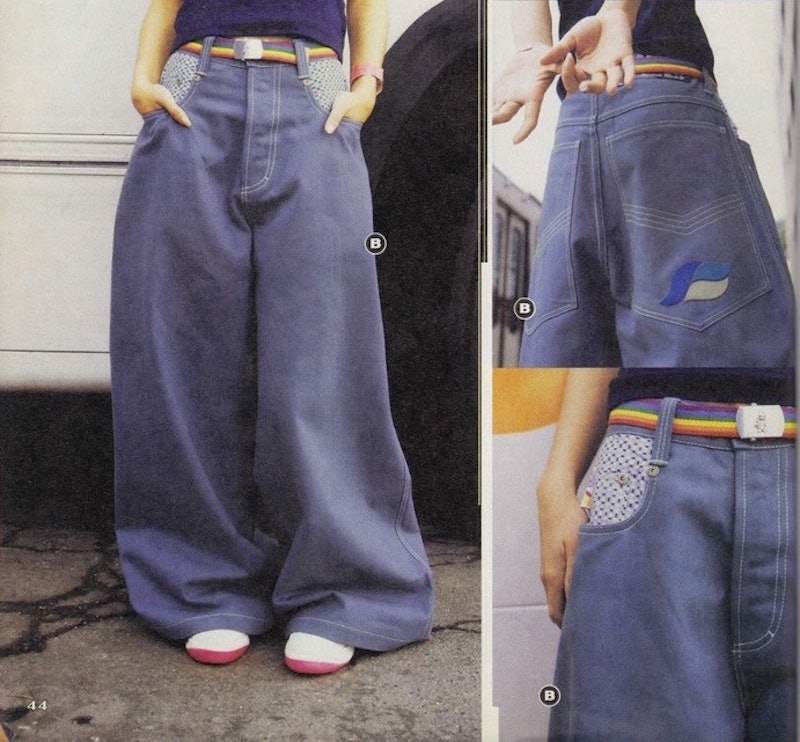 When I was growing up, my mom was very patient with my rebellious preteen clothing, letting me indulge in things like fishnet gloves and skater shoes. But the worst of my tastes revolved around the flared pants trend of the early '90s and early 2000s. She watched on quietly as I dabbled with acid greens in the form of hair mascara, and didn't say a peep when I bought a platoon of tube tops, but how I wish she'd intervened when the flares started to take over my closet. Talk about cringing when pictures are looked back upon.

It honestly seemed like the wide-legged pant took over the millennium: Skateboarding pants and floor-dragging sweats leaped through the pages of Delia's catalogs, and celebs walked down red carpets wearing their baggiest denim versions. Dress pants that were as wide as trapeze tents became subversive, and jean flares were popped underneath dresses for good measure. If you were feeling fancy, you could even sport a dressy capri pair, or kick back in cargos when you had nowhere to be.

It was a mess, but we can look back now and fondly admit that it was our mess. This was our youth, guys, like it or not. Below are 11 of the worst flared pants from the late '90s and early 2000s.

Ah, transit pants. They were wide-legged and often came with white seam stitching, in case they weren't loud enough already. They looked extra cool when paired with sporty touches like platform flip flops and cotton polos, letting us combine our inner rebel with some goody-goody prep.

You know what else looked super stylish with a polo? Some flared dress pants, that's what. For the inner sassy accountant in all of us, buying a pin-striped pair of office pants was just the ticket to rocking the '90s.

If you wanted to pair your dresses with flares, you had to keep one sartorial rule in mind: There were no rules. Clearly. Matching baggy with baggy was the look du jour, so the more bell-bottomed your jeans were, the better.

It appears we had a thing with making dress pants subversive in the late '90s/early '00s. It was like, "Oh yeah, you want me to be a lawyer, do you? Here's what I think of that!" And then we proceeded to grab a stencil and spray paint, um, Transformers onto our suits?

We now had a handy place to stow all of our Lip Smacker's, but the cargo pant could veer dangerously close to "Middle Aged Old-Style Drinker" territory. So in order to emphasize that we were not, in fact, blue collar Midwesterners, girly tank tops were needed.

They were baggy and low-riding enough to show off our lacy thongs, and seemed to be put through copious amounts of acid rinses, sand blasts, and God knows what else. This was a look that deserves to rest in peace and never, ever be reincarnated because it has clearly been through enough. (And so have we.)

I want to say something clever and snarky here, but it seems that I've fallen into a severe kind of shock. There's no bouncing back from these. Or from the fact that I had something very similar at one point or another in my closet.

We definitely had a thing with using and abusing our denim in the early naughties. Here we have Kelly Clarkson wearing a particularly savaged pair of pants with the trademark look of having the hems tucked underneath one's shoes so they could get scraggly and dirty. Because we somehow decided that that was the look we were going to begin the millennium with.

May I introduce to you the next abomination on the break-of-the-millennium list? If cargo pants weren't bad enough on their own, we decided to introduce a denim option into the rotation. Because the baggy pockets made it easier for us to store our barf bags in.

Just because you were chilling on the couch didn't mean you had to tap out of the flared pants trend! Even sweatpants came in circus-tent-sized hems, letting you drag the bottoms across the floor so your sloppy-wear could look like it enjoyed an extra ride through the gutter.

Perfect for those fancy nights out during which you wanted to show off your boots but didn't want to wear a dress, the flared capris would do in a pinch. Now all you had to do was toss a sparkly scarf over your shoulder, grab your favorite lingerie cami, and you had yourself a look that was fit for the naughties.

Let's all join hands now and take a moment of silence in thanks that these dark, scary years are behind us. It is time to learn from our mistakes.

More like this
‘90s Streetwear Brands That Are Making A Major Comeback
By Dominique Norman
10 Nail Trends That Perfectly Capture The Early 2000s
By Paris Giles
Ed Hardy-Inspired Cross Nail Designs Are Majorly Trending
By Danielle Sinay
5 Mini Skirt Outfits To Wear, Inspired By These Brave Souls
By Avery Matera
Get Even More From Bustle — Sign Up For The Newsletter