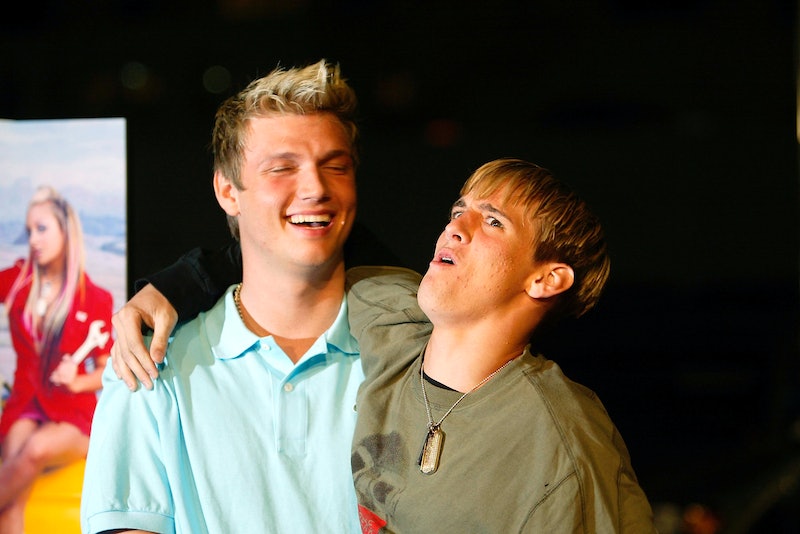 Though Nick and Aaron Carter may not be at the peak of their fame now, the brotherly duo were the pop stars to watch in the early '00s. Given the hero worship of the Backstreet Boys, it's not all that surprising that boy bander Nick's brother Aaron was able to propel himself to stardom by using Nick's platform as a launching pad. Of course, Aaron may have started out as "just Nick's younger brother," but after the success of his 2000 album Aaron's Party (Come Get It), it was his songs that were stuck in our brain on an endless loop (whether we wanted them to be or not.) Of course, bonafide pop star or not, some things just never change — like Aaron's constant reminder to fans that he was the younger brother of a Backstreet Boy. Now that Aaron's second album Oh Aaron is 15 years old, it's time too look back and examine just how many times Aaron references his brother Nick — you know, just in case you forgot who Aaron was related to.

Though Oh Aaron is Aaron's second album to go platinum, he seems to spend a lot of time name-dropping his older brother. (Dude, we get it — we all know why you're a thing.) Maybe it's a thank you for paving the pop star way, or maybe it was testing the waters for a Nick/Aaron brother band that never quite took off. Whatever the reason, here are all the times Aaron name-checked Nick on an album that he named after himself:

1. When Nick Was Featured On Aaron's Single

Aaron was just 13 (!!!) when he released the single "Not Too Young, Not Too Old" which featured his older bro. The track featured fairly unsettling lyrics to come out of a tween's mouth, such as "I'm older now, come and show me body."

Of course, Aaron can't get over referring to himself as "Baby Backstreet" on this track, even though I'm pretty sure the fact that Aaron is Nick's mini-me and shares his last name was clue enough for the world.

Not only does Aaron name-drop his own brother in "Come Follow Me," he also casually slips in that he's pals with Britney Spears with: "Go to the Backstreet show/Or the Britney Spears show/Cuz it's starring me, yo."

4. When Aaron Uses His Brother To Get A Cute Girl Tickets

Is Aaron aware that he's using his brother to gain popularity? Definitely, according to the titular track "Oh Aaron." In this song, Aaron straight-up drops that his brother is the Backstreet Boy, sparking everyone and their mother to ask him for tickets to see the BBs do their thing.

5. When Nick Claps Back At Aaron On Aaron's Own Track

Aaron may be showing off his familial relationship to Nick, but Nick is having exactly none of it on "Oh Aaron," basically telling him that, uh, he actually can't give away over 3,000 Backstreet Boys tickets. Of course, the whole thing ends up working out for the best, because Aaron eventually earns the cash by opening for the Backstreet Boys. Is this the Aaron Carter origin story?!

Aaron, oh Aaron. What are we going to do with you?