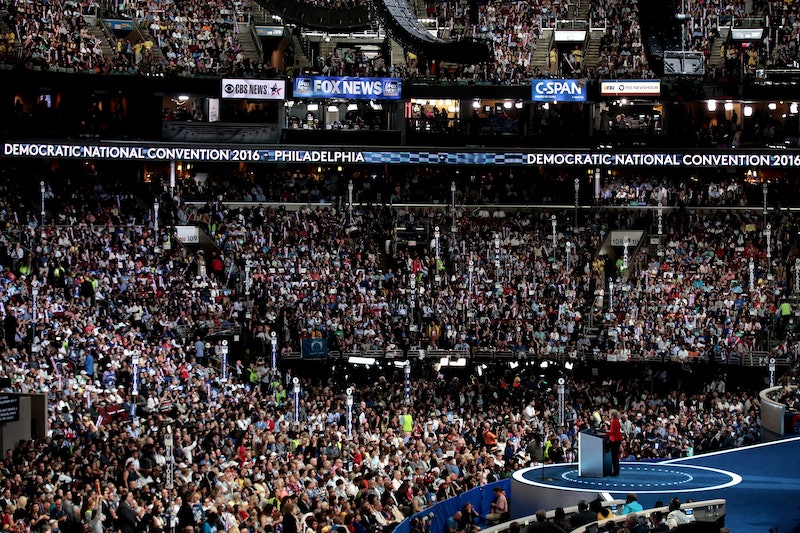 Tuesday marks day two of the Democratic National Convention in Philadelphia, Pennsylvania. Day one was a surprisingly scene, full of political intrigue, uncertainty, and a whole lot of dramatic tension. Thanks to the presence of diehard Bernie Sanders delegates who're reluctant to give up the dream of a Sanders nomination (even though he lost the primary race soundly), or are simply unwilling to throw their support behind Hillary Clinton just yet, calls for party unity loom large. And in that spirit, the DNC nomination process will be different than the RNC's in one big, potentially consequential way: Sanders' name will actually be entered into nomination, meaning his delegates will actually be able to throw their support behind him during the roll call vote that'll pick the nominee.

That's not to say there's any doubt about the outcome. Thanks to a primary process that saw Clinton secure 389 more pledged delegates than Sanders (as well as millions more popular votes), her nomination hasn't actually been in doubt for months. As incendiary as the leaked DNC email showing chair Debbie Wasserman Schultz saying "Sanders isn't going to be president" in May was, she was indeed speaking to what was a virtual mathematical certainty at the time. And that's going to hold true on Tuesday, even as dozens upon dozens of Sanders delegates may nonetheless vote for their candidate, thus voicing their objections to Clinton's ascension.

The DNC entering Sanders into nomination and allowing his delegates to officially back him during the roll call vote will strike a sharp contrast against what went down at last week's Republican National Convention in Cleveland, when elements of the voting procedure roiled the party's anti-Trump wing, giving some delegates no opportunity to safely vent their frustrations and officially register their dissent. Basically, the Trump campaign and the RNC didn't want to tolerate any widespread show of disunity about his nomination, so many state delegations were forced (by the previously-approved rules of the convention) to officially cast all their votes for him, regardless of what the bound delegate results actually would've dictated.

In other words, when some state delegations (most prominently those of Utah, Alaska, and Texas) announced their votes from the primary process, the non-Trump ones were read aloud, but subsequently discarded, with the official tally reflecting a Trump sweep. This caused a huge amount of turmoil on the convention floor, and a challenge to the procedure ultimately caused a big delay in the middle of the RNC's second day, shuffling up the schedule and presenting a striking scene of disunity on national television.

Make no mistake, there will still be signs of disunity on the Democratic side, because as some Sanders delegates displayed even after his speech imploring them to support Clinton, many simply aren't ready to give up the dream and back her candidacy, or are openly planning to vote for a third-party candidate instead.

But there's not going to be a repeat of how the GOP tried to stifle any dissenting votes on the official record. That proved to needlessly inflame things, and it could've been flatly self-destructive for the Democrats to follow suit, given how many Sanders backers are still fuming over the revelations of the DNC emails. Whether or not it displays a literal divide within the party or not, the Democrats have clearly decided that registering the full, divided delegate results will foster more goodwill.

Another way of saying this is that there's actually going to be something intriguing to watch when the vote rolls around on Tuesday. It'll be interesting to see how many Sanders delegates heed his call to support Clinton, compared to how many hold out. According to The New York Times, it's scheduled to go down around 6:00 p.m. ET.