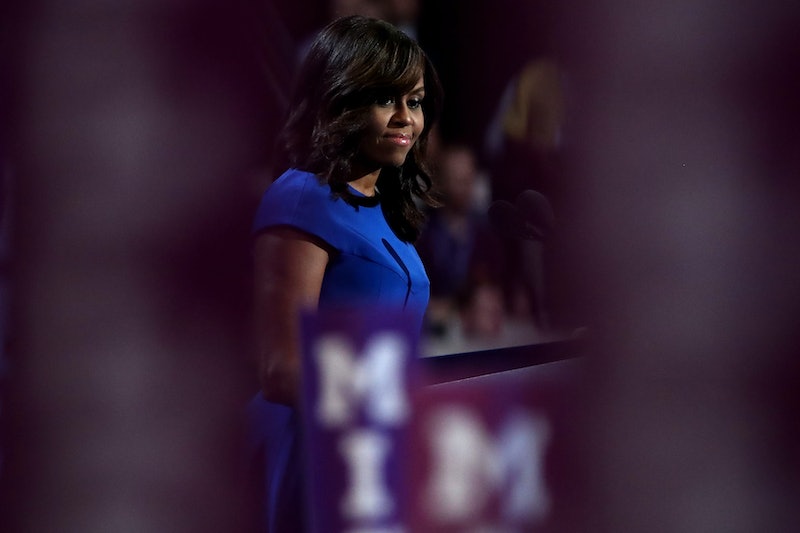 After a rousing and moving speech, First Lady Michelle Obama is already being lauded as the most powerful speaker of the first evening of the Democratic National Convention in Philadelphia — easily beating out the other prime-time speeches from Vermont Senator Bernie Sanders and Massachusetts Senator Elizabeth Warren.

And this is the case for good reason. Obama’s speech rescued the narrative of Day 1 of the DNC from the acrimony and discord brought to the convention floor by a small minority of Sanders supporters. In effect, she refocused the conversation away from the politicians and the scandals and toward the next generation. Speaking with a tone that made one think she was on the edge of tears, Obama said, “And make no mistake about it, this November, when we go to the polls, that is what we’re deciding. Not Democrat or Republican, not left or right. No, in this election, every election, it’s about who will have the power to shape our children for the next four or eight years of their lives.”

With a subtlety and agility largely lacking in modern political oratory, Obama turned the current default approach to the 2016 race — choosing the lesser of two evils — into a responsibility incumbent on the current electorate to chart a course for the United States that will most benefit the next generation. In effect, she made the case that this election isn’t about us or our feelings, and voting purely on those feelings is irresponsible.

Instead, Obama turned her speech into a choice between two paths forward — or really, one path forward and one path backward. As Zack Beauchamp wrote in Vox, “Elevating a woman after a black man would be a resounding statement that we are moving forward — that American ideals about liberty trumped the American reality of slavery and sexism.”

And rather than leave any space for the idea that somehow settling on Clinton as the lesser of two evils was its own acceptable alternative, Obama drove home the urgency of the choice being faced: “And as my daughters prepare to set out into the world, I want a leader... who is worthy of my kids' promise, and all kids' promise. A leader who will be guided every day by the love and hope of impossibly big dreams that we all have for our children. So in this election, we cannot sit back and hope that everything works out for the best. We cannot afford to be tired or frustrated or cynical.”

There is a category of Americans for whom abstention and cynicism is just simply not an option — people who are dependent on Obamacare, people who stand to substantially benefit from a living minimum wage, and, well, parents. Their kids’ childhoods are fleeting, and while a vote for Jill Stein or Gary Johnson might feel virtuous in the voting booth, their children will spend their most formative years with the winner of this election, who will come from a major party. Michelle Obama’s reformulation of the election — making us consider the impact of our vote on someone other than ourselves — was a powerful and hopefully influential move. Bernie Sanders appears to already be echoing her sentiments.

At a meeting with delegates Tuesday morning, the Vermont Senator said, “It is easy to boo, but it is harder to look your kids in the face when you’re living under a Donald Trump presidency.”

I wouldn't be surprised if this theme continues throughout the week in an attempt to decompress the pressure cooker of antagonism that anti-Clinton activists have for the presumptive Democratic nominee. We think of the right to vote as a personal right, but perhaps, in the end, it is a responsibility — to our children, our nation, and our future. And treating it as something we can choose to avoid supports the same negativity that the Republicans and their orange-haired candidate are thriving on.