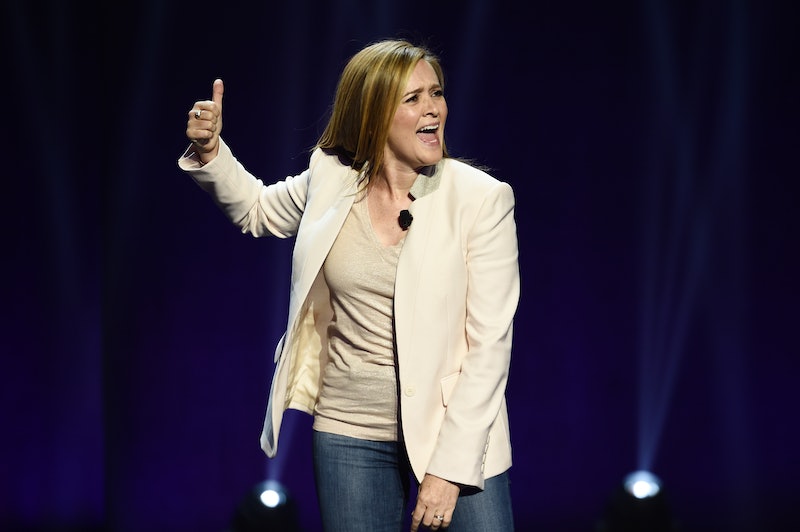 Full Frontal star and Madame President of late night television Samantha Bee took a stand against her own network, TBS, on the first night of the Democratic National Convention. The network's Twitter account linked a video titled "The Call of the Wild" of Democratic nominee Hillary Clinton, and it featured cuts of Clinton laughing and then a pack of hyenas laughing. The tweet stated, "Move over Donkey! There's a new mascot in town! ...#ImWithHyena." WTF, right? The joke seemed like just another unnecessary jab at the first female presidential nominee in history. Bee was clearly not pleased with the timing or the message about Clinton, and her response was pulled directly from the soon-to-be Democratic nominee's playbook: "Delete your account."

Bee's tweets and, thankfully, the video itself have been since deleted, and only screen grabs of the incident exist. Fortunately, TBS has also issued an official apology about the unfortunate nature of the tweet and thankfully admits the mistake in posting the video with the caption and hashtag. TBS' statement reads, "This post was obviously a poor attempt at humor and has been taken down. Moving forward we'll leave political satire to professionals like Samantha Bee." After the success of Full Frontal and Bee becoming a late-night icon for her raw and unapologetic take on American politics, it was pretty cool to see her affect some change at her parent network and even more encouraging to see that TBS has her back.

In case you missed it, Bee's tweet mimics Clinton's same response to Donald Trump in early June. Clinton's tweet went viral, reeling in almost 500,000 retweets and just about 640,000 likes. The phrase itself has also become a commodity, frequently used by other celebrities who aren't happy with Trump and his constant bashing of Clinton. It's easy to see why Bee chose to resurrect the phrase.

This isn't the first time Bee has taken a stand against jokes about Clinton and her campaign on Twitter. In fact, she's been pretty vocal throughout the election process. After the "Delete your account" tweet, Trump responded with:

...to which Bee responded, simply and slyly:

Bee's devotion to her nominee makes noise on her show every week, which is exactly why so many of us can't take our eyes away from the already beloved series. Thank goodness for Samantha Bee and her devotion to speaking important truths through comedy, and, of course, for not deleting her account.