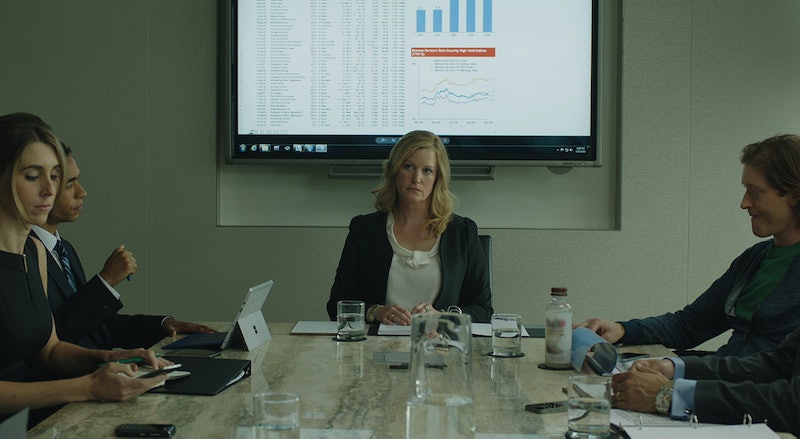 Anna Gunn portrays a Wall Street exec in Equity, a new drama from Sarah Megan Thomas and Alysia Reiner. The movie, in theaters July 29, follows an investment banker named Naomi Bishop as she becomes involved in high-stakes games in the finance industry. Equity follows on the tails of some other recent movies about corruption on Wall Street, from The Big Short to Money Monster, but its story is particularly interesting since it revolves around the experiences of a single person, and because that person is a woman. It's definitely a departure from male-driven movies about the industry, but is Equity a true story based around the life of one actual woman on Wall Street?

In terms of the actual narrative, Equity is a work of fiction. Naomi Bishop is not a real person (nor was she based on one real person), and the companies in the movie don't exist in real life. However, the film touches upon a very real — and important — topic: the role of women in positions of power. It was Sarah Thomas who first came up with the concept for the movie. She told Vanity Fair , "I have a lot of friends who live in New York and work on Wall Street, and I’ve always been fascinated by how smart and powerful they are. I personally love Wall Street movies, but there was no female-driven Wall Street movie. So I called Alysia [Reiner].” And so the wheels were set in motion on the project that would become Equity.

CNN declared that, although the movie is fictional, "it's also one of the most accurate portrayals of Wall Street in a long time." The movie's accuracy is largely thanks to the advisement of 25 female Wall Street veterans, who also funded the project. These women were current and former investment bankers at companies such as Barclays and Goldman Sachs, and they shared their personal experiences and industry expertise. According to Vanity Fair, Thomas and Reiner reported that a recurring theme in the executives' stories was the notion of a glass ceiling for women in finance. The filmmakers sought to portray this struggle onscreen, but also to flip it on its head by making a movie fueled by powerful women.

Barbara Byrne, an investment banker who lent her expertise to the film as well as providing financial support for it, told the New York Times that the film's message about women's struggle for professional equality rings true. She said, “What resonates the most is the title, Equity. When do we get our fair share, when do we get a seat at the table? There’s a lot of great stories that aren’t being told, because the women can’t get a stake."

One of the most remarkable things about Equity, then, is the fact that it's a story not just about women, but also by women. The producers, director, and screenwriter are all female, as is (of course) the film's star. Anna Gunn spoke of the experience to Vanity Fair, saying, "It was exciting to hear a female director yell ‘cut’ and to have females around the monitor." So even though Equity isn't a true story, it is a groundbreaking example of storytelling by women and about women.

More like this
Sandra Bullock, Girlboss Extraordinaire
By Matt Harkins & Viviana Olen
The 'Thor: Love and Thunder' Trailer Finally Shows Christian Bale As Villain Gorr
By Grace Wehniainen
Sadly, 'Fantastic Beasts: The Secrets Of Dumbledore' Isn’t Streaming — Yet
By Arya Roshanian
Laura Dern Said “Cultural Awareness” Made Her Rethink This 'Jurassic Park' Fact
By Grace Wehniainen
Get Even More From Bustle — Sign Up For The Newsletter