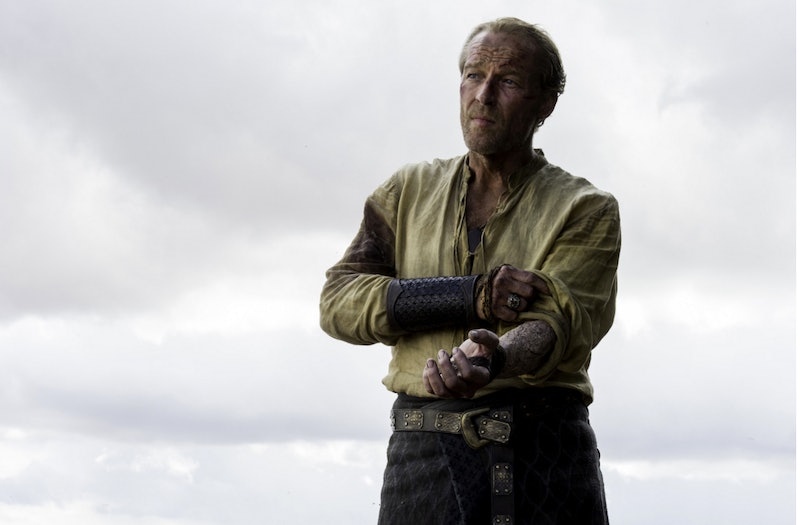 As fans of Game of Thrones, it is our solemn and very important duty to spend every second between seasons theorizing on what's going to happen to our favorite characters. It's not an easy job, but someone has to do it. Which is why the fact that Vanity Fair reported that Iain Glen and Gwendoline Christie were seen in Belfast is really quite lovely news. (The actors, of course, play Jorah Mormont and Brienne of Tarth respectively.) It gives us, the theorizers, something to do, which is really nice because without Game of Thrones theories what else do we have?

Now, this is about to get spoiler-heavy and also very, very rumor-heavy. As of right now, the writers and showrunners of Game of Thrones have ignored all of my pleas to be brought into the inner circle, so don't take any of this as gospel truth... yet. First, let's talk about what we definitely know. We know that in Season 6, we saw the Bear attempting to rescue Daenerys (but, come on, dude, she can clearly take care of herself) and then being unable to claim the benefits of his prize due to the whole being-stricken-with-greyscale thing. Instead, Dany sent him off on a quest to cure himself.

We also know from an announcement from Casey Bloys, the president of HBO programming, that production will be starting later than usual because, “Now that winter has arrived on Game of Thrones, executive producers David Benioff and D.B. Weiss felt that the story lines of the next season would be better served by starting production a little later than usual, when the weather is changing." So if Glen and Christie aren't there to be on camera, what could they be in Belfast for?

Now let's talk fan theories. Recently, a fan sighted both Glen and Christie on a flight to Belfast, and Glen was reading what looked to be a script, Now, this could have been a script for another project, especially since the cast announced at Comic-Con they didn't have scripts yet, but what if? Meanwhile, Belfast is key to this speculation because, according to Visit Belfast, a lot of GoT is shot at Titanic Studios in Belfast, as well as a few other locations in Northern Ireland. A trip to Belfast by two GoT actors seems awfully suspicious.

Watchers on the Wall, who are probably some of the best theorizers of us all, speculate that Glen and Christie are simply in town for a wardrobe fitting, which is certainly a possibility. But then Vanity Fair threw in their two cents, with a theory that Glen and Christie will be working on some stunt choreography before production even starts. This idea comes from an interview with HBO's Making The Thrones about Season 5, in which Glen said "I knew before I even read any of the script that it would be a physical season for me. I went out a month before we started shooting and got an outline of what was going to be required. "

If Glen and Christie are both working on fight choreography, could they be fighting together? I can't see them fighting against each other (at least for long) because they are both hella noble and well-meaning. And, for such a big place, the world of Game of Thrones always seems to have people bumping into each other, so it wouldn't be unheard of. Meanwhile, the last we saw of Brienne, she was simply paddling off somewhere into the darkness with Pod, and we don't actually know what her next move will be. Brienne is the type to take on a quest for the betterment of mankind, so helping Jorah find a cure for greyscale seems right up her alley.

I'm all about a Brienne/Jorah spinoff. All. About. It. Keep watching and theorizing, guys. I really think, if we try hard enough, we might be able to figure out the entire plot of Season 7. Maybe.