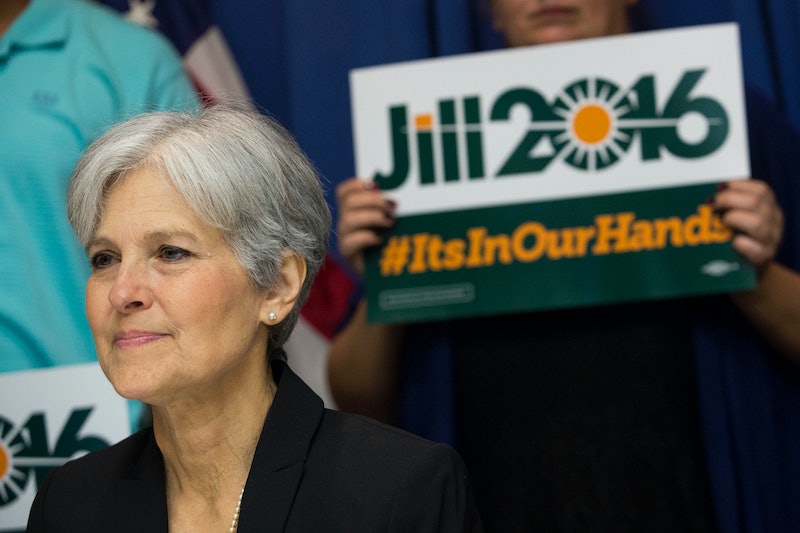 The Republican and Democratic national conventions have given the country a lot of reasons to groan over the past week. The RNC's plagiarism debacle and Trump-tastic spectacle that bore a striking resemblance to WWE Smackdown, not to mention the DNC's leaked email scandal and subsequent hierarchy chaos, haven't inspired a ton of confidence in the two-party system. This bizarro election cycle has instigated an unprecedented number of people to consider voting for third party candidates, a decision which seems easier to make this year than ever. If you've been wondering, "Should I vote for Jill Stein or Gary Johnson?" the first step is to learn more about them, then decide how you really want to spend your vote.

Dr. Jill Stein is one of the most qualified and savvy third party candidates the country has ever seen. She did a remarkable job of piggybacking off Bernie Sanders' success to gain media attention by emphasizing their shared passions for climate change, criminal justice reform, and raising the minimum wage. Currently, she's polling around 3 percent nationally, which is really good for a third party candidate. If you're a Bernie or Buster, she's your third party candidate.

Gary Johnson is also a uniquely qualified third party candidate, and a compelling alternative to Trump and Clinton. The former governor of New Mexico, he's moderating the Libertarian party by making it more accessible to voters who don't think that far outside the box (he wants to keep drivers' licenses around, which is definitely a good thing). He's also in favor of marijuana legalization, eliminating the Department of Education, and saying goodbye to federal income tax. He's not exactly the Trump replacement, but if you don't fit in the Republican or Democratic party, take a look at Johnson's unorthodox political beliefs.

If this was your first intro to these two great third party candidates, take some time to get to know their platforms in depth. But if you've already been grappling with the decision to go outside the two party system, you're probably looking for guidance on whether voting third party is a good choice. Unfortunately, I can't really give you that.

Ultimately, the decision on whether or not to vote for a third party comes down to a question of morality. If you don't think you can stand to cast your vote for someone inside the two party political system, that's your prerogative and no one can or should shame you for that choice. Stein and Johnson represent change that comes from outside the two major political parties, which is a totally legitimate reason for voting for them. However, that means you have to be comfortable with the outcome of the election, no matter what happens. If you vote third party, you have to be able to live knowing that your vote was a symbolic expression more than an active choice.

As scary as the idea of a Trump presidency is to me personally, I still believe that the republic will stand if he's elected. Not splitting the ticket isn't a good enough reason to vote for Hillary Clinton, and hating Hillary Clinton isn't a good enough reason to vote for Donald Trump. The American presidency is too important not to vote with your conscience, so all you need to do is feel morally justified when you step out of the ballot box in November. If you can informedly, honestly, and earnestly defend your presidential preference, then you've fulfilled your civil obligation.

The election is coming up a lot faster than you think, and if you decide to vote third party, you need to follow through on that even before November. Your candidate doesn't stand a chance of winning unless dedicated, passionate people fight for them tooth and nail, and you've got to lend your support to them as much as possible if you truly believe in their cause.

Political change happens before the elections, and you need to be a part of it if you want a third party to win the White House.