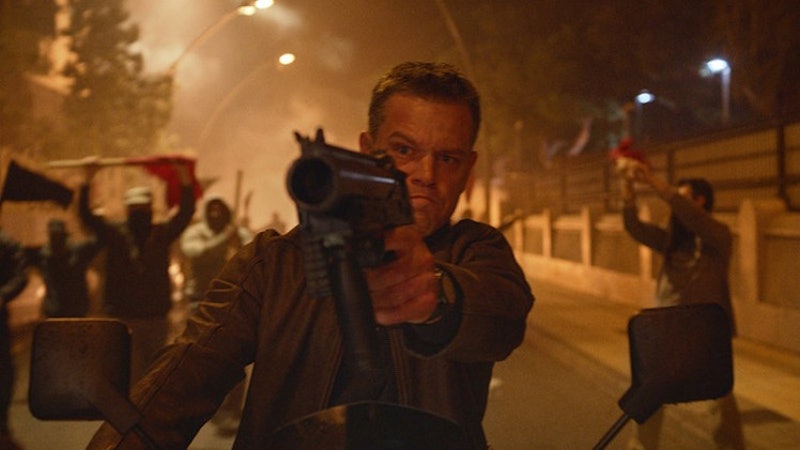 The Bourne franchise returns for its fifth installment with Jason Bourne, but that's not the real big news. The big news is that Matt Damon has returned to the role of Bourne. Damon hasn't portrayed the super spy since 2007's The Bourne Ultimatum — it was Jeremy Renner who played the lead character, Aaron Cross, in 2012's Bourneless sequel The Bourne Legacy. For a long time it really looked like Damon would never do another Bourne movie, and yet here he is. But will it be his last go-round? Does Bourne die in Jason Bourne?

Fans of Damon's forgetful spy needn't panic — Jason Bourne does not die in Jason Bourne. The plot does revolve around the CIA's desire to kill him, once again, but as usual he's able to avoid being taken down with relative ease. The film focuses on a new CIA program called Iron Hand, which is the successor to Treadstone. But instead of creating super spies to protect American interests like that program did, Iron Hand looks to set up a worldwide online surveillance network to secretly spy on everyone. Bourne unwillingly gets caught up in a plot to take it down, which puts him back in the crosshairs of the government.

Also driving Bourne's plot forward in the film is the revelation that his own father created Treadstone. He wants to find out just how his father was involved, as well as the truth behind his dad's death. Researching these things brings him straight to the CIA's door, further putting him in harm's way. The biggest antagonist is CIA director Robert Dewey (Tommy Lee Jones), who employs "The Asset", a Blackbriar assassin, to take out Bourne. Bourne kills the asset but spares Dewey, only to see him try to kill him and end up getting killed himself by ambitious CIA newbie Heather Lee (Alicia Vikander).

At the very end of the film, it's revealed that Lee does not really have Bourne's best interests in mind — she just wanted Dewey out of the way so she could become director. She wants to bring Bourne back to work for the CIA, or kill him if he refuses, and she believes she has his trust. But Bourne knows her true intentions, and shows her his cards before disappearing at the end of the movie to possibly fight another day.

I don't know if Matt Damon will make another Jason Bourne movie, but with the character still alive, there's always the possibility of another return.