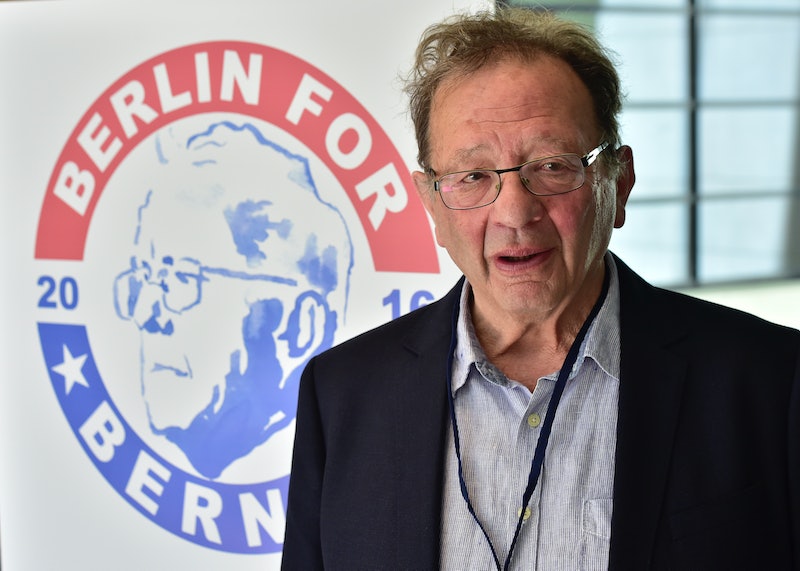 During Tuesday's roll call, Sen. Bernie Sanders' brother Larry Sanders cast his vote for his brother Bernie, and the tears were flowing. Larry, who lives in England, is a member of the Democrats Abroad delegation, which represents American citizens living outside the country. After another delegate read 16 of the delegation's 17 votes, she handed the microphone over to Larry to cast their final vote. He paid emotional tribute to his parents and beamed with pride at his brother's many accomplishments.

I want to read before this convention the names of our parents, Eli Sanders and Dorothy Glassberg Sanders. They did not have easy lives and they died young. They would be immensely proud of their son and his accomplishments. They loved him. They loved the New Deal of Franklin Roosevelt and would be especially proud that Bernard is renewing that vision. It's with enormous pride that I cast my vote for Bernie Sanders.

Larry evoked more tears than his own. Bernie cried at his brother's heartfelt statement, as did his wife, Jane Sanders. Though Bernie didn't discuss his personal life much on the campaign trail, this isn't the first time that mentions of his parents stirred up feelings.

In his victory speech after winning the New Hampshire primary, Bernie reflected on his humble upbringing in a rent-controlled apartment, his mother's early death, and the fact that she never realized her dream of owning her own home: "The truth is that neither one of my parents could ever have dreamed that I would be here tonight standing before you as a candidate for President of the United States."

Bernie was college-aged when his mother died in 1959, and his father died shortly thereafter in 1962. They never got to see how far their son would go — from mayor of Burlington to a U.S. representative for Vermont to the state's senator, and then toward the Democratic Party's presidential nomination, a bid that officially ended Tuesday.

And that's why having his big brother Larry at the Democratic National Convention, casting a delegate vote for his little brother — the underdog candidate who almost nobody knew a year ago, who went on to wage an unexpectedly challenging campaign against Hillary Clinton — was so meaningful. Whether or not you ever felt the bern, Larry's emotional DNC moment likely had you feeling something.