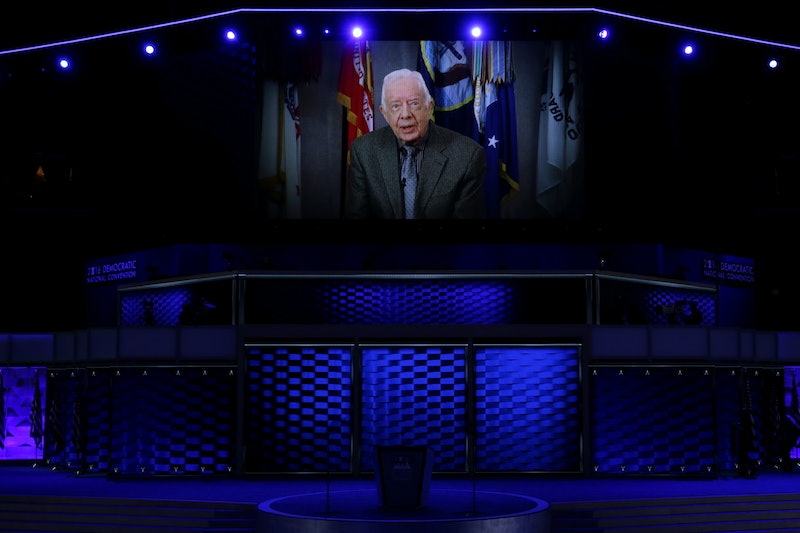 Before the Mothers of the Movement and former President Bill Clinton took the stage at the Democratic National Convention, a video message from former President Jimmy Carter was played for the convention attendees. Carter's message was introduced by his grandson, former Georgia State Sen. Jason Carter, who said of his grandfather: "I promise he is itching to get on the campaign trail and elect Hillary Clinton."

Jimmy Carter opened his message by reflecting on his own nomination, which he received 40 years ago. Then, like many of the other people who spoke on Tuesday, Carter talked talked about Clinton's qualifications. He contrasted Clinton's "substance and style" with Republican nominee Donald Trump's apparent violations of "some of the most important moral and ethical principles on which our nation was founded." He talked about how he has known Clinton for decades, ever since she was a young attorney.

But one of the most important parts of Carter's message was his call to action for young people. He thanked Vermont. Sen Bernie Sanders — Clinton's main opponent in the primaries — for getting so many young people involved with politics, and he urged these young people to "stay engaged" and to get out the vote in November.

You can read the full transcript of Carter's video message below:

Good evening, Democrats. 40 years ago, in our nation's bicentennial year, I stood before you to accept your nomination as president. Rosa and I wish we could be there with you tonight, to prepare for what will be an extremely important election, one that will define for a generation who we are as a nation and as a people.

We Americans have a clear choice before us. I feel proud that the two Democratic candidates who competed throughout a long primary season — Sen. Bernie Sanders and Secretary of State Hillary Clinton — comported themselves with dignity, talked about issues that matter, and presented a vision for our nation.

And I thank Sen. Sanders for energizing and bringing so many young people into the electoral process. To all of you young Americans I say: Stay engaged, stay involved, and be sure to vote this November.

At a moment when it's become more important than ever to lift people up, to offer hope and a roadmap to a brighter future, instead we see a Republican presidential candidate who seems to violate some of the most important moral and ethical principles on which our nation was founded. We can and must do better.

And fortunately, the Democratic nominee we will soon be choosing offers a stark contrast in both substance and style, and also competence and experience, to what the Republicans have chosen.

I've known Hillary Clinton for decades. When she was a young attorney, I appointed her to the Legal Services Corporation, where she became the first woman chair. There, Hillary fought to make sure that in our courts, those with the least were treated the same as those with the most, and since then, as you know, Hillary has always demonstrated a willingness to take on the most difficult challenges and to get things done. Her life has been dedicated to advancing human rights across the globe, especially for women and children.

These are perilous times. We need someone with a strong heart, a deep understanding of the issues, challenges, and opportunities, and a steady hand. Hillary Clinton has my support. I know she will also have yours. A united Democratic Party will prevail in November. Thank you all, and God bless the United States of America.