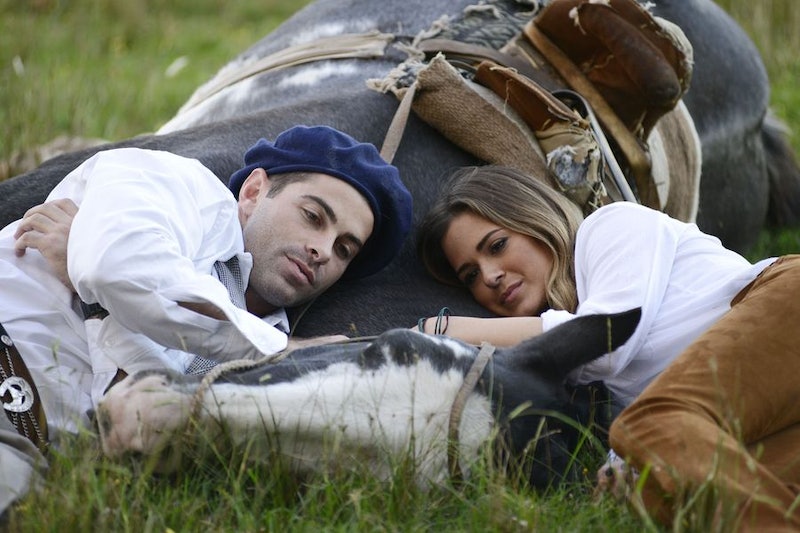 Honestly, I almost forgot that Alex was on The Bachelorette — it feels like so long ago that JoJo sent him home following a date in Buenos Aires that involved horses and a beret. Some of the guys on The Bachelorette: Men Tell All dog piled on Alex pretty fast, saying he was just as dramatic and manipulative as Chad, but he just hid it better on the show. When Alex was there with Chad he looked like the good guy, but after Chad left, Alex started some drama of his own. Wells and Luke defended Alex, talking about his military service, and that had me thinking — where did Alex serve in the military? Is he still considered active duty?

And just for the record, I can respect someone's military service and appreciate what Alex has done for our country and still think he acted like a jerk on The Bachelorette. He was really bitter and annoying when he found out that JoJo had chosen both him and Derek on a date — she just couldn’t decide who to send home, so she opted for both. Alex was really hurt about that, and his being a Marine has nothing to do with his bad attitude. Speaking of being a Marine, I couldn’t find anything on the Internet about specifics of his duty, just that he was in the Marine Corps. According to his time on The Bachelorette, he was recently discharged, but there are plenty of pics of Alex in his uniform so I’m really not sure when his duty ended.

In any case, I hope Alex can learn to cool down a little bit. Wells and Luke mentioned on Men Tell All that as a Marine, you’re usually expecting a fight and they think that's why Alex behaved like he did on the show. Whatever the reasoning for his Bachelorette behavior, I think it was right for the guys to call Alex out on Men Tell All — if Chad is being criticized, Alex should be too.