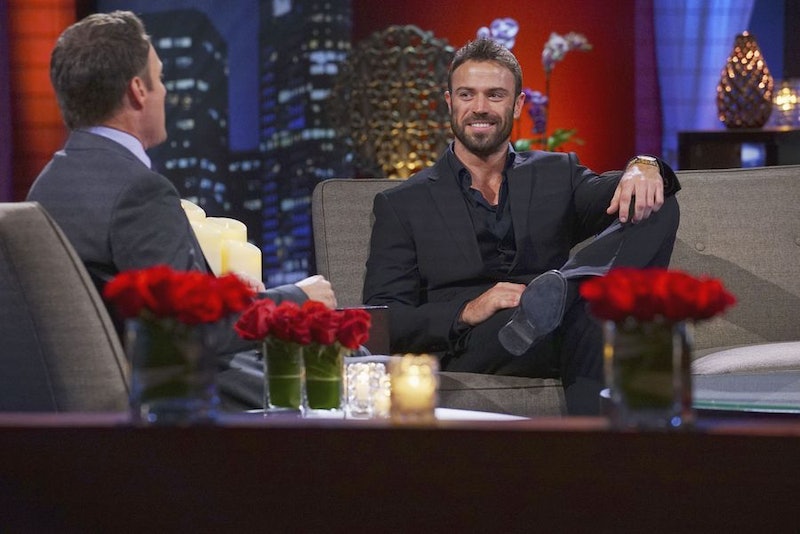 Well, it's official: Chad's appearance on Men Tell All is everything ABC promised and more. Now that it's time for the men of The Bachelorette to get all of their feelings off their chest with the season soon ending, that includes Chad... and he's dropping a few truth bombs on the way. You know, like the fact that allegedly, not only did Chad hang out with Robby's ex, Hope, but Grant's ex, too. So what's the deal? Is Chad dating Grant's ex-girlfriend? That doesn't seem to be the case, but on Men Tell All, Chad claimed that something happened between the two of them.

At some point during the special, Chad got into it with just about everybody, but early on, Grant was ready to throw the first punches. It came out that Chad had been hanging out with Grant's ex, Jen, since the show finished filming, and America's favorite deli meat eating villain confirmed the rumors. And not only did he say that he's "absolutely" still talking to Jen in some capacity, but he's also talking to Hope, too.

And in case you needed more evidence that they've actually spent time together, here's Chad and Jen together. It proves nothing but the fact that they've met and hung out together at least once, but apparently it was enough to make Grant pretty mad.

Previously, there were rumors that Grant broke up with Jen in order to go on the show, but on Men Tell All, Grant denied that claim, saying their relationship ended first.

We may never know what the truth is, but we do know that Chad has definitely gotten under these guys' skin, which I suspect is exactly what he wanted. And honestly? I don't hate it. He may not be the nicest guy out there, but he is one of the most entertaining. You do you, Chad. I'll be watching, sweet potatoes and all.