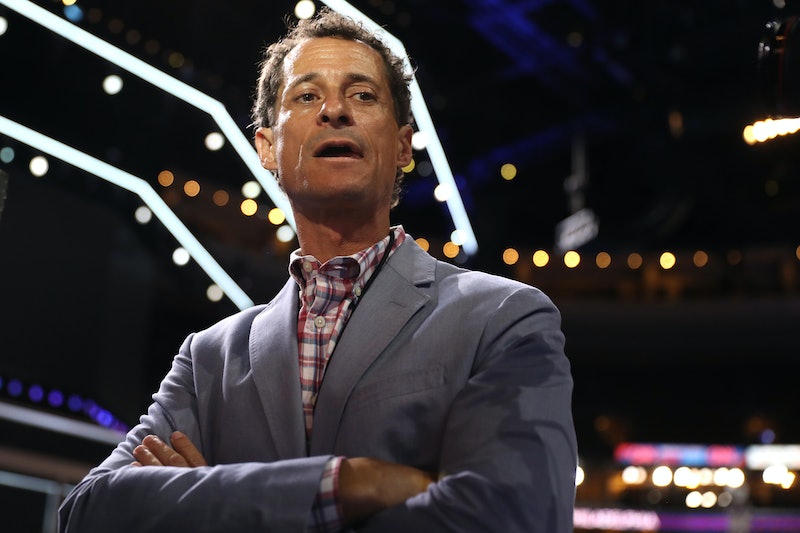 Like the Republican National Convention, the Democratic National Convention has not been spared controversy since it began on Monday. Two days into the event, many Democrats still haven't been convinced to support party presidential nominee Hillary Clinton over Vermont Sen. Bernie Sanders, especially after the DNC email leak made headlines Friday. In a conversation with Bustle, former Democratic New York Rep. Anthony Weiner says the DNC controversies are missing part of the story. According to him, the Democrats' bumps along the road over the past week won't do much damage as the election nears. Instead, he suggests, the nation should be concerned with something entirely different.

One of those controversies was prompted by Sanders delegates, scores of whom left their seats and walked out after the Vermont senator asked the committee to officially nominate Clinton, his former rival in the presidential race. "Oh, I wasn't aware it happened," Weiner tells Bustle. NBC News, which interviewed over a dozen walkout organizers, reported that the stunt was the result of a relatively last-minute plan. Still, over 100 seats were momentarily left empty, sparking concerns that party unity will not come about instantaneously.

Furthermore, DNC attendees who are part of the "Bernie or Bust" movement have refused to accept Clinton as their party's nominee, although the roll call vote already determined the committee's decision earlier Tuesday. Given the fact that politically-involved citizens have perhaps the strongest opinions of them all, should the discord at the DNC come as a surprise to those who are viewing? Weiner thinks not. "This isn't a shoe convention," he says. "... So it's not really news that there are people with different ideas here."

But when it comes to the DNC email leak, which seemed to show that the committee favored Clinton over Sanders during the primary, top Democrats can agree that any hint of bias is unacceptable. During an interview on 60 Minutes, Virginia Sen. Tim Kaine, Clinton's running mate and a former DNC chairman, told CBS' Scott Pelley that attempting to affect the outcome of an election goes against the spirit of the Democratic Party:

Weiner is focusing on a different angle than some of his fellow Democratic politicians, and refuses to believe the DNC email leak has caused voters to distrust the committee. According to him, there's a bigger problem afoot, and it has nothing to do with the party's inner workings. "Well, a foreign power hacks into a system of a business enterprise here in the United States and you think the problem is what was in the emails?" he asks. "Isn't the problem the hacking that happened?" On Tuesday, The New York Times reported that U.S. intelligence agencies investigating the hack have "high confidence" that Russia is responsible for the leak. Still, they stressed that the motives behind the act are uncertain.

During the convention, Weiner, who has run for mayor of New York City twice, hinted that he may give it another go — but only if Donald Trump Jr. runs for office in the state. "I would come out of retirement just to beat him like a rented mule, and then I'd turn the keys back over to de Blasio," he told Fox 5 news at the DNC. The former representative might not be finished with his political career just yet.