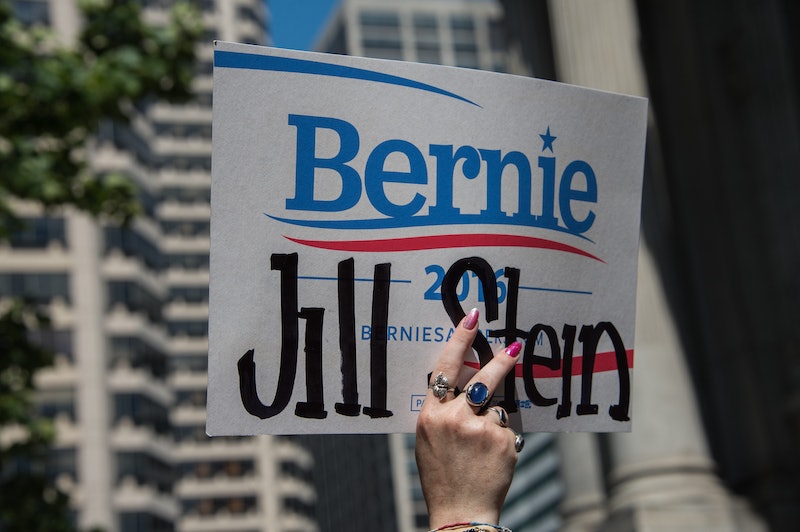 Though both the Republican and Democratic parties have all but wrapped up their presidential nomination process, there are at least two other politicians of note gunning for the job: Green Party candidate Jill Stein and Libertarian Gary Johnson. They are low-profile compared to their major-party rivals, but both seem to have emerged out of an election of extremes. The support for Hillary Clinton and Donald Trump has been pretty black-and-white, with seemingly little room for a change of heart. With both parties currently unable to unify under their nominees, could Stein and Johnson combine forces to create a more progressive platform? Do they even know one another?

The short answer is yes, they've met. Stein and Johnson squared off against one another during the 2012 presidential race in a debate hosted by RT America, designed to give voters "access to candidates ignored by most of America's corporate media." (Curiously, the debate was not held until November 5, the day before the election.) The debate showed the two clash over their foreign policy positions.

Though there was interest in the candidates, it's important to remember that the 2012 election cycle now seems sane compared to the one we're faced with today. The candidates had support, but the dissatisfied rumblings over a two-party system were not as strong in 2012, when President Obama was running as the incumbent candidate. According to a report by NPR, Johnson only pulled in roughly one percent of the vote in the 2012 election, with Stein polling less than half of one percent. Now, Real Clear Politics shows that in a four-way match between Clinton, Trump, Johnson, and Stein, the latter two pull in support from anywhere between 7 to 14 percent of registered voters.

So why don't the two come together in a united front? Their support isn't staggering, but in an election as unpredictable as this one, you never know what they could pull if off together. Well, the primary issue is that, despite both being third-party candidates, the two probably wouldn't make the best of friends.

For being the outsider candidates, the two do have some stark differences in their campaign platforms. The pair have conflicting views over abortion rights, the Department of Education, and renewable energy, to name a few things. While they both champion themselves as anti-establishment choices, their differences create a clear divide. Certainly not a division as strong as Clinton and Trump's, but it's there nevertheless.

So while the two do know each other, and would probably jump at the chance to debate their differing policies again, voters probably won't be seeing them team up any time soon. Voters may have to fantasize about their Progress Dream Team from the likes of Sanders and Stein.