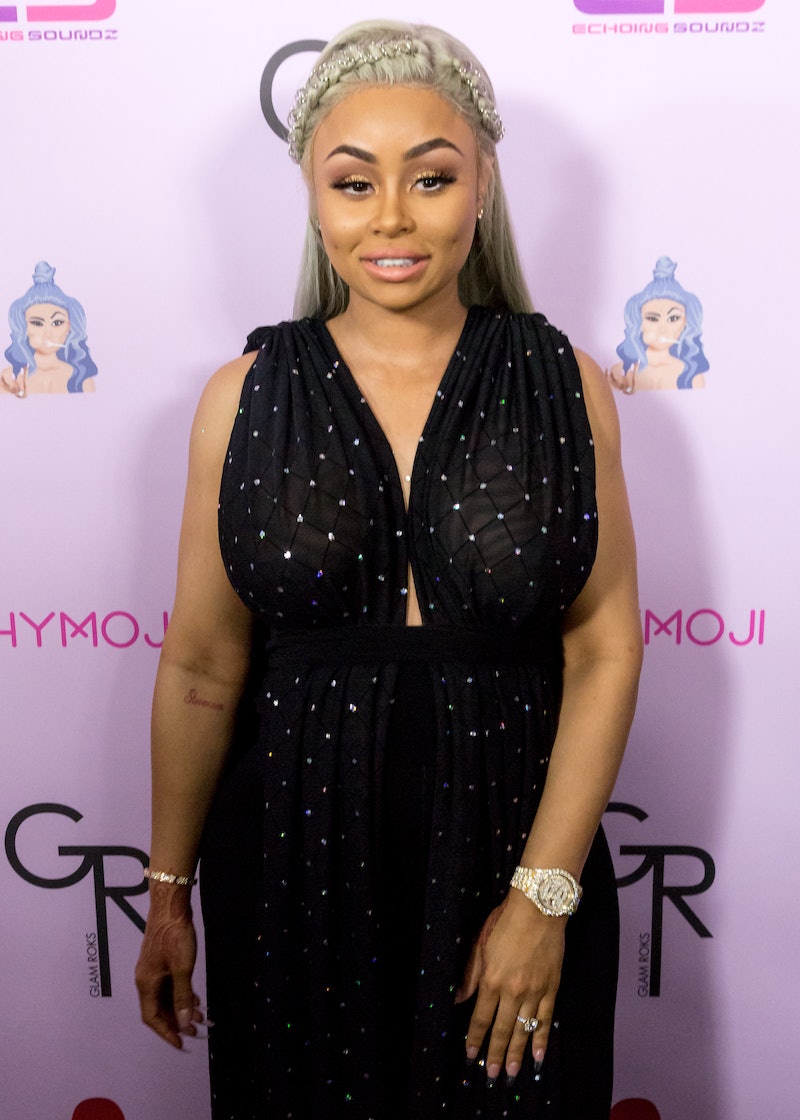 Whatever's going on between Rob Kardashian and Blac Chyna — Have they broken up? Are they back together? Is Rob actually a middle schooler with his petty penchant for deleting all Instagram pics of Chyna? Find out at 11 — it's nice to see that the rest of the Kardashian family supports Unborn Baby Kardashian no matter what.

In a sweet video added to Kim Kardashian's Snap story on Tuesday night, the reality star (that would be Kim K herself) lovingly rubs Chyna's baby bump — just one night after her brother allegedly called it quits with his fiancée (or at least purged all traces of her from Instagram).

In the vid, Kim and Chyna pose seductively for the camera as Kim twirls her ponytail and announces, "Hey guys, it's going down in San Diego tonight," where the fam is in town to celebrate Grandma MJ's birthday party. Chyna then cradles her bump, and Kim joins in by rubbing her belly. It's a sweet moment between the future sisters-in-law, and it's one that proves that no matter Chyna's relationship status with Rob, the Kardashian family has her back.

To recap: On Monday, Rob deleted every photo on his Insta, which coincided with rumors that the couple — who are engaged and expecting — had broken up. The gossip on this was rampant and real, with rumors flying that the two called it quits after Rob found a "suspicious text" on Chyna's phone, prompting him to end things while filming a scene for Keeping Up With the Kardashians. Another source, however, told People that the incident was simply an "argument" and the two were not over for good, adding that it would "take a lot for [Rob] to break up with her."

As Us Weekly points out, though Rob wasn't in any family Snapchats on Tuesday, Chyna was still rocking her engagement ring — a fairly telling sign that things are still on.

No matter ChyRo's relationship status, it's heartwarming to see that the Kardashians will forever support Chyna and Rob's child. The Kardashian family may be vapid AF and problematic half the time, but I have always admired just how accepting they are of non-traditional family situations — whether that's embracing Caitlyn Jenner's transition, welcoming Chyna and Tyga's son King Cairo as part of their family, or rushing to Lamar Odom's side after he overdosed, despite the fact that he and Khloe had been estranged.

While Rob and Chyna may or may not have relationship issues to sort out before she gives birth this fall, that baby will always be surrounded by an abundance of love — regardless of ChyRo's own marital status.