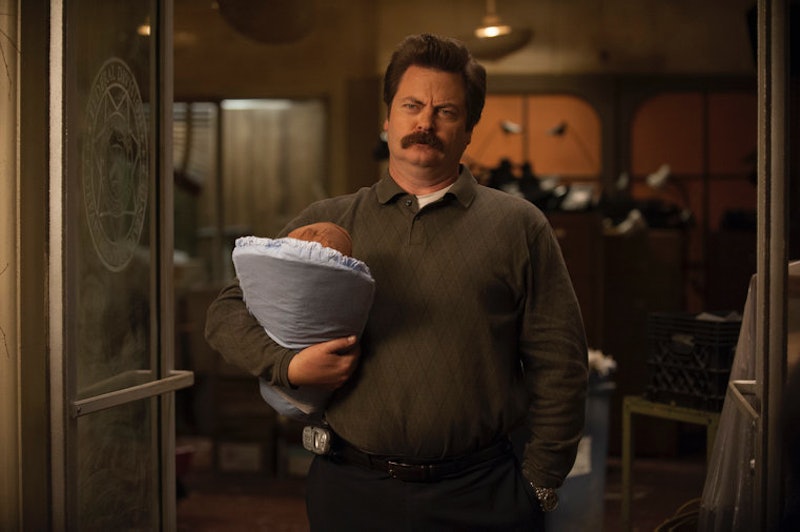 Some Parks and Rec fans might have forgotten until "The Wall" that this season, there are two pregnant characters, Ann and Diane. Between Leslie's recall, Ann moving and the many other storylines, Ron's girlfriend had been swept aside, only brought up when he made general statements about "the girls," meaning Diane and her two daughters. Then finally, during the March 6 episode, it was revealed that Ron Swanson has a baby.

And no, it wasn't revealed as in, during the episode Diane gives birth and Ron tells everyone he is a father. It was revealed as in, Leslie asked Ron about buying him a stroller for the baby shower, to which he replied, "we already have a stroller," and pointed to a stroller with a baby in it. And not even a newborn. John (middle name redacted) Swanson was, according to Ron, "born sometime ago." Thanks for all that detailed info, Ron!

Of course Leslie was simultaneously shocked, excited and infuriated by this news, and most viewers probably mirrored her reaction. How could Parks hold out on us for this long? Although we have to admit, they were really being true to character. Ron's always been a private guy and even though he and Leslie have only grown closer since the series started, it's still like him to not mention life-altering events.

However it's easy to forgive both the show and character when they follow the big reveal with plenty of adorable moments between father and son.

Apparently all it took to completely melt Ron was a baby boy. Sure, we've seen his softer side with Diane and her daughters, but this was a whole new Ron. Maybe it was a combination of the joys of fatherhood and his discovery of a City Hall floor in the middle of renovations, but Ron was downright giddy.

It might be sometime belated, but welcome to Pawnee, John! You're bound to have a wonderful life filled with fishing, fine craftsmanship and when you're old enough, Lagavulin.