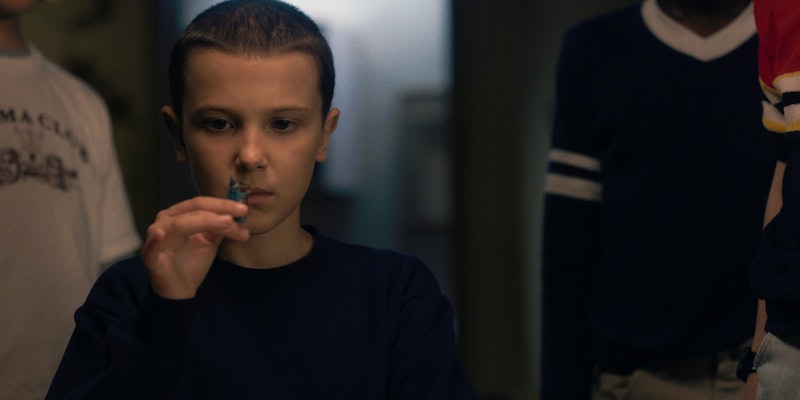 By now, many of you have probably marathoned your way through Netflix's newest thriller series Stranger Things . (And if you haven't, then be warned that there are some Season 1 spoilers ahead!) But even eight episodes later, there are still so many mysteries and questions about this town that have yet to be revealed, particularly in regards to the Hawkins Lab and the full extent of their experiments. Based on the numerous flashbacks, Eleven's former prison was a place of nightmares, where she was subjected to a vast array of scientific testing, each one more horrifying than the last. But the most worrisome part about it begins and ends with Eleven's name on Stranger Things . Because, when you stop and think about it, why is Eleven called Eleven in the first place? The conclusion we can draw is downright terrifying.

Yes, Eleven was given her named based off of the tattoo discovered on her arm, which reads "011." But why do you think she was given that particular number? Why not "004" or "008"? The only logical conclusion I can draw from this is the scary possibility that those numbers were already taken from other former test subjects. And if that's the case, that means there were 10 other kids who were put through the exact same trials that she was.

In Episode 6, Joyce and Hopper pay a visit to a woman called Terry Ives, who used to volunteer for Hawkins Lab experiments many years ago as part of the MK Ultra study for the CIA. However, she didn't know she was pregnant at the time of these experiments and ended up supposedly miscarrying her daughter, Jane, during the third trimester. Many viewers suspect that Jane is actually Eleven and Hawkins lied about the miscarriage so they could use the girl (and her special abilities) for their own means.

The idea in itself is heartbreaking, separating a mother from her child. But what if that wasn't the first time this laboratory has done something like that? Perhaps they specifically seek out women who are pregnant (even if they don't know it themselves), realizing that those children will most likely be born with Eleven's mind control powers. That would certainly help to explain why Dr. Martin Brenner never seemed that concerned or surprised whenever Eleven's nose started to bleed after using her abilities. Odds are, he's already seen that side effect before, multiple times. (10 to be exact.)

So if that really is the case, then what happened to the other 10 children, you may ask? I hate to say it, but I have a terrible feeling that their special condition was also the cause of their death. Every time Eleven used her powers in a big way, it seemed to make her weaker. The boys always assumed she just needed time to recharge, but there's also a chance that the constant use of her abilities was slowly eating away at her and would eventually lead to her death. She could've been living on borrowed time this entire season, though, there is hope that she's possibly still around given the meal a la Eggo waffles that Hopper mysteriously left behind in the woods during the finale.

But even if that is the case and Eleven survived, that doesn't mean the other possible children did. Maybe the right amount of dosage was given in Eleven's case that makes her more prone to survival. Let's just hope that Hawkins and their inhumane experiments are able to be stopped and soon. Otherwise, I fear there could be a number "012" by the time Season 2 rolls around. It's like the saying goes: stranger things have happened.