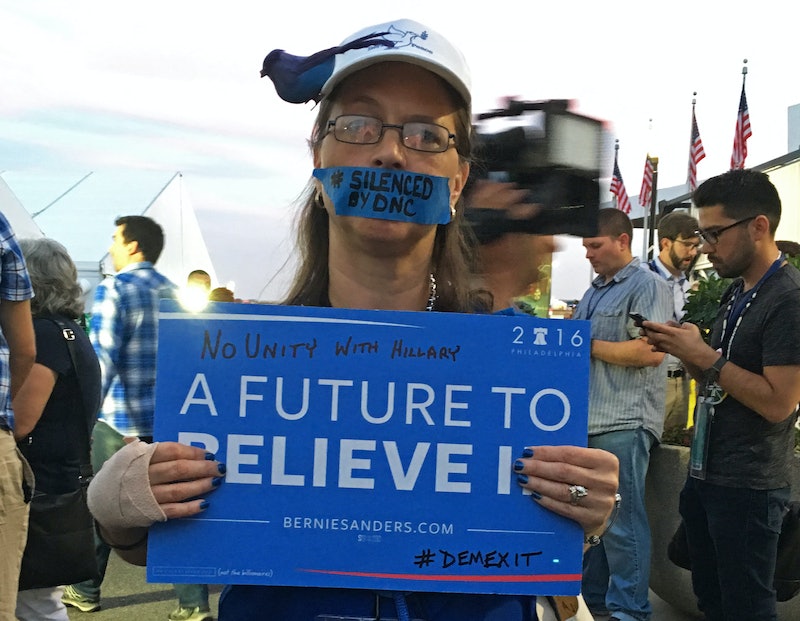 Sen. Bernie Sanders and now-official Democratic presidential nominee Hillary Clinton, along with other prominent figures within the party, have been pushing hard to get Sanders supporters behind Clinton throughout the Democratic National Convention. Sanders gave a long, heartfelt pitch to his supporters the first night of the convention, repeating his endorsement of Clinton. And, on Tuesday, he made the expected gesture of calling for Clinton to win the nomination by acclamation during the roll call vote. But some supporters, including several of his delegates, are not taking Sanders' lead, and they're expressing their dissent with #DemExit. What does DemExit mean?

The hashtag picked up steam on Tuesday as dozens of Sanders delegates organized a last-minute walkout during the roll call. These delegates walked out when Sanders called for Clinton's nomination by acclamation. They linked arms in and around a media tent outside the convention center and placed duct tape over their mouths to symbolize being silenced. #DemExit, in this context, stood for the delegates exiting the convention.

But #DemExit has been around since before the convention, and did not initially stand for a walkout. The person who started the DemExit Facebook page, whose first post was on June 24, claims to have originated the hashtag, and he or she did so as a Trump supporter encouraging people to leave the Democratic Party. A post on Wednesday reads:

#‎DemExit‬ is a universal message to all other Americans that politics can be about change and not just about defending the status quo. Even tho [sic] I started this hashtag as a right winger which came from the idea of Brexit #DemExit is not the property of the political right.

Sure enough, people on the left have been using the hashtag to express their intent to leave the Democratic Party. There's a #DemExit subreddit dedicated to discussions of how to re-register, and disenchanted voters have taken it up on Twitter. But it's important for folks to note when their primaries are for state and local elections; if you want to #DemExit, but you also want to vote in down-ballot elections, you should wait until after those to change your affiliation if you're in a state with closed primaries, as explained by Inquisitr earlier in July.

Though Sanders himself will be participating in #DemExit by reverting to an independent, the non-affiliation under which Vermonters elected him to the Senate, he's still pushing for people to vote for the Democratic nominee. Based on the way the hashtag is being used on twitter, it seems highly unlikely its users will be following his lead there.