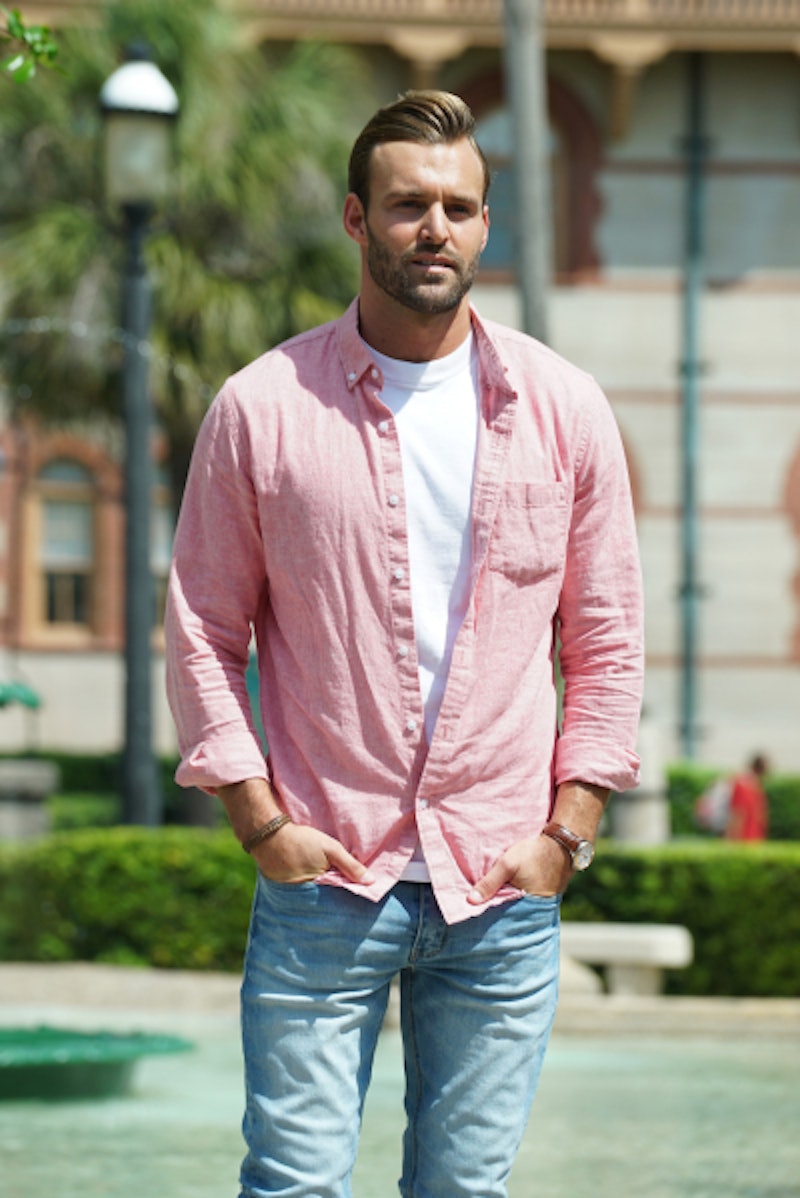 JoJo’s season of The Bachelorette is almost over, but surprisingly, the biggest drama has nothing to do with her. On The Bachelorette: Men Tell All, “villain” Chad Johnson claimed that Robby Hayes threatened his ex-girlfriend not to talk to the press about their relationship. All season long, rumors have swirled that Robby and his ex-girlfriend, Hope Higginbotham, broke up just before Robby started filming on The Bachelorette, which he has denied on the show. Just when we thought these rumors were finally squashed, Chad brought it all back up on Tuesday night's episode, and now Robby has released a statement to Bustle about these allegations.

But before we get to Robby's statement, a little more context. JoJo and Robby have spoken about Robby's past relationship rumors on The Bachelorette, and from what we’ve seen, JoJo seems to believe that he and Hope were broken up long before The Bachelorette started filming. When Reality Steve reached out to Hope for an interview, she declined his request and wrote a message in which she claimed, "I will not be able to follow through with the interview you requested. It has been brought to my attention by the opposing party that any further actions on my part will result in negative consequences."

In his statement to Bustle, Robby claims that Hope's allegation that he's threatened her and/or her family are wholly untrue. He writes:

"...I have not spoken with Hope since the day we broke up nor have I spoken to Chad since his exit from the show. That goes for my entire family as well.

Hope’s roommate reached out to me to apologize and sent a long, genuine text message in which I responded by calling her to thank her. I spoke to her on the phone last Tuesday (three days after the Men Tell All filming).

During that conversation, I explained to her that it has been exhausting dealing with [Hope and Chad’s] antics on social media and in other various outlets. From the rumors of me leaving her for the show to her posting pictures with Chad calling me out with false accusation [sic] and her latest Instagram post that she actually directly tagged me in, I have remained quiet, respectful, and honest! I had always been taught by my parents to take the high road and not stoop to that level and since this all kicked off, that is exactly what I have done!"

Robby also gave his view on the Reality Steve situation, as well as Chad's possible role in this drama, and claimed in the statement:

"That same day, I was told Hope was writing a letter to Reality Steve and asked him to end this negative talk and put it in both of our past [sic]. Although I was happy she said she wants all of this in the past (because that’s exactly what we are to each other, the past) I was not okay with the fact that she had insinuated that I threatened her.

Isn't it ironic that Chad filmed Men Tell All on Saturday (July 16th) and said I threatened Hope before my talk with her roommate and her letter to Reality Steve? With that being said, it is likely another publicity stunt like their photo together and it is not worth my emotions. Joelle on the other hand, is worth my emotions :)

Hope is now very far in my past (as is Chad), although it seems that she is trying to keep it present. We all know Chad is using these women to gather more attention, and it’s sad to see the women's emotions played with. As I've mentioned earlier I have kept to myself, stayed quiet, and taken the high road every time one of them takes a shot at me. Hoping to move past this part of my past, just like JoJo and I did during my hometown episode."

What Robby's statement makes clear is that he and Hope still have one thing in common: they want to put their breakup and all of the drama that followed behind them.

As Hope said to Reality Steve, "...only Robby and I know the words spoken and events leading up to our break up toward the end of January... I hope that you can respect my wishes to move on, and leave that part of my past where it should be… in the past."

They really do love the word "past," don't they?

Anyway, we'll never know the full extent of what happened between them, but in these he-said, she-said situations (especially with Chad in the mix), it's important to let both parties share their sides, and I'm glad that Robby was able to give his perspective.