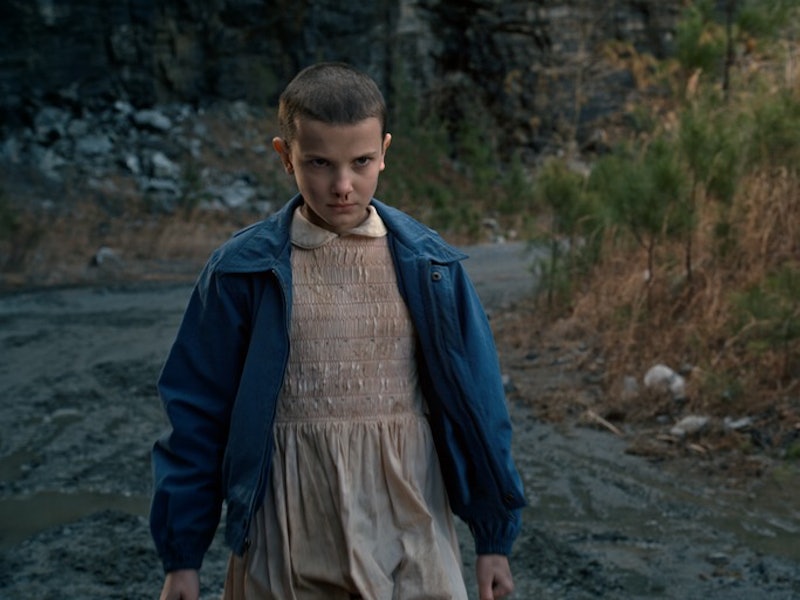 With the exception of Winona Ryder, Netflix's new and highly addictive series Stranger Things was made up of some very unfamiliar faces. And yet, that didn't stop viewers from immediately falling in love with them, especially in regards to the show's breakout star Millie Bobby Brown, who plays Eleven, the ultimate hero to this tale. (Warning: Season 1 spoilers ahead!) There's still so much we have yet to learn about this particular character, like is her name really Jane? Why was she called Eleven? And, perhaps most importantly, is she really dead? I'm sure we'll spend the majority of our summer obsessing over these very questions. Heck, even her overall appearance is something of a mystery. For example, why is Eleven's head shaved on Stranger Things ?

The way I see it is Eleven's look takes on multiple purposes throughout the narrative. For starters, it made many of the characters initially confuse her as a boy, which sent Hopper on a wild goose chase, believing the child to be Joyce's missing son, Will. (Misdirection is key in thrillers like this.) But I believe the main reason for Eleven's buzzed head of hair has mostly to do with where she was being kept all those years.

As we all know by now, Hawkins Lab was performing a number of terrifying experiments on Eleven in the hopes of harnessing her special abilities for their own selfish purposes. In order to do this, they had to monitor her brain activity, which is why she was always seen wearing all of those cords and head gear during one of their many trials. So odds are, having her head shaved was strictly for that very purpose and allowing them to be able to get a better read off of her brain with less unnecessary hair in the way.

Granted, this is all just speculation for now since the reason behind Eleven's hairstyle was never really explained. In fact, we still don't completely understand the full extent of her powers. For all we know, she may not even be able to grow her hair any longer. Maybe nosebleeds aren't the only side effect to using her powers. Dr. Martin Brenner would know much better than us, but given that he said about roughly 10 words throughout the entire season, he wasn't exactly a plethora of information, so we're left to draw our own conclusions, at least for now.

Either way, it's clear that Eleven was a truly special person both inside and out, which is why it would be a shame to lose her as a character. But given the very-telling Eggo waffles Hopper left in the woods during the finale, I'd say there's a good chance we'll get to see her again — that is, if Stranger Things gets renewed for a second season. (Which it should!) Eleven has an incredible backstory and it's one that deserves to be fully explored.