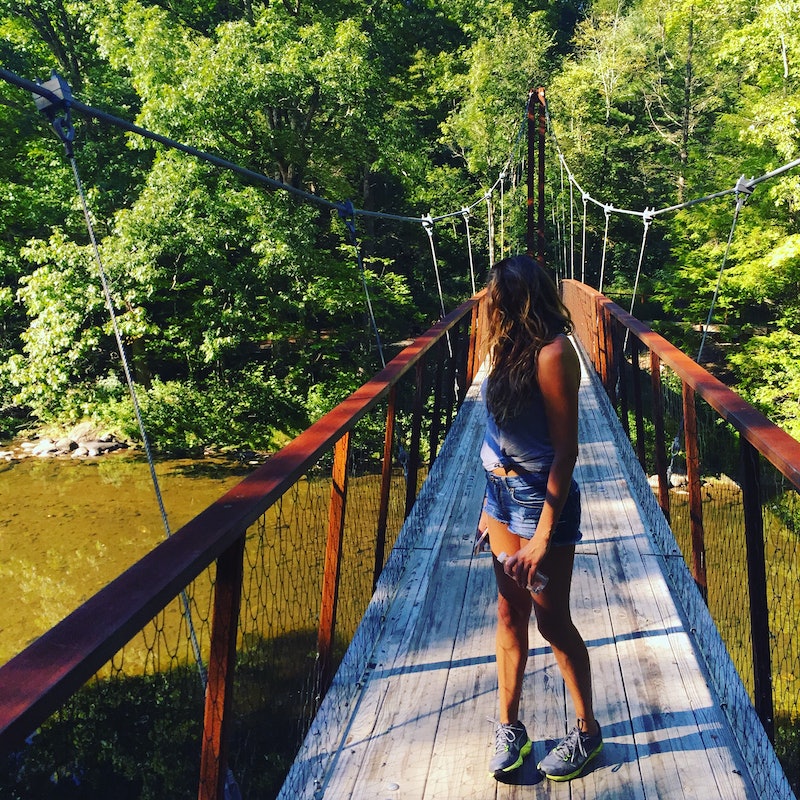 When I first heard about Forest Bathing I was pretty sure it was the 2016 version of "glamping." Something along the lines of traveling into the woods, Troop Beverly Hills style: To submerge myself in a spacious tub amongst the trees for the ultimate soak. Turns out it's nothing like that.

According to Japanese Sensei Kazumasa Kawasaki (a hybrid healer and master of skincare I met on his recent trip to NYC), "The phrase 'Forest Bathing' became popular around 1982, when it was recognized that 67 percent of Japan`s land mass was covered by forests. Forests, which were known in ancient times to hold hidden powers that aided physical and mental health."

He also tells me that "Shinrin-yoku" (the technical term for Forest Bathing) does not involve any sort of actual bathing — in the water sense. Rather, it occurs when you have direct or indirect contact with the trees to capture the essence of nature — aka they speak to you.

Now I'm getting the vibe that this could go slightly wrong for me...something along the lines of that horror movie called The Forest starring Lady Gaga's ex, Taylor Kinney:

Being stranded in the middle of nowhere speaking to the flora and fauna? I'm not sure forest bathing is for me, but never one to extinguish my intrigue flame before actually experiencing what's causing it, I keep going with the questions for Kawasaki.

What actually happens once you get in there though, if there's no bathing, jacuzzi-style?

"You are absorbed by the atmosphere. By the exquisite sounds of birds chirping, the flow of running water in a nearby stream, a light breeze blowing between the trees, the smell of soil...you feel this and can even taste it with all five of your senses," he says.

Pause. Did I do camping entirely wrong during my youth and five+ years as a girl scout? (Yes, I was that weirdo who took it too far into Juniors territory.) I remember a lot of nature, but nothing this deep.

So you just stand there, breathing and listening?

"By taking deep breaths in the middle of the forest and being in touch with sounds that come to you, it helps you to interact with nature in a way that makes you feel comfortable," says Kawasaki.

How long do I need to commit though, timing-wise, and still feel comfortable?

"There is no set time frame to feel the effects. It's more important to look inside your inner self and ask whether you feel more relaxed and somewhat healed. For the modern person living in crowded cities, it's recommended that one spend some three to four hours in nature since you are surrounded by concrete and asphalt and man-made artifacts and suffer from stress, depression, insomnia, and other lifestyle-related diseases, such as allergies and cancer."

Well damn, thanks for reminding me of all of the benefits of living in New York City. Three to four hours though?! Who has that kind of time to hike?

I decide I do. For the story. Because if Forest Bathing can cure my insomnia and make me more zen, then I'll give it a whirl. Luckily this decision comes at the time that I'm pitched a boutique inn in Washington, Connecticut that's recently started offering the treatment. A Metro North train ride to my hometown state seems easier to manage than trying to convince my Bustle editor to let me expense a flight to Tokyo, so I head to the The Mayflower Grace Inn & Spa.

Pulling up to the idyllic resort, I'm immediately on board because this place is stunning:

Side bar: If you ever end up taking a trip to TMG, go just to meet the adorable man who runs the gift shop, Abdo Ballester. I mean, go for Forest Bathing too and because this might be one of the most magical Relais & Châteaux 5-star properties in all of New England, but also for Abdo. He's everything and he'll let you try on allll the vintage rings:

Now back to FB. The Spa Director had told me that Forest Bathing is very low-impact and guests go at their own pace, but I'm hoping there might be a wine and trail mix break at some point if this is really going to be four+ hours. Since I have decided to take a year-long sabbatical from the corporate world in order to travel, write, clear my head, and check off as many #bucketlistgoals as I possibly can, now's as good a time as any to go into the woods:

Obviously Thoreau greets you as you do just that. This was taken moments after our guide almost lost her sh!t when I took out my phone and started snapping pics for my Instagram story. Digital detoxing and original photo documenting are impossible to do at the same time, my friends.

As she leads us deeper in, grabbing leaves and holding them under our noses to sniff, pausing for long inhales and gazes upward to appreciate the clear blue sky, and to freak out over a tiny snail that's somehow made its way into a tucked away hole inside a bunch of rocks, I'm beginning to think this is bullsh!t.

Yet, somehow at the same time I'm also really into it, because #nature:

If it takes a beauty and wellness "trend" to get concrete jungle dwellers to spend an entire afternoon outside, then by all means I'm behind this. I'm also here for the bridge pics:

Plus, I recall what Kawasaki had said about all of the health benefits to the immune system. Cold season is approaching after all...

This is when we take our shoes off:

Aha! Water at last. Although this feels great and I'm finally getting into FB, I'm still nowhere near the point at which the trees are talking to me.

Am I doing it wrong? When do we start to mediate? No but really, where is the trail mix?

As far as physical and mental health go, I can say those things have definitely improved as we wrap up FB, but I can't help but feel a tiny bit underwhelmed. I guess when you've become accustomed to over-the-top things as a beauty writer like underwater massages in a blue lagoon in Iceland by a Viking, or sweat lodge Temazcal rituals in Mexico, a few peaceful hours with Mother Nature can seem basic, but it shouldn't. At least it didn't when I used to spend hours doing just that as a girl scout and I'm pretty sure a camping excursion is what brought Phyllis Nefler and her Wilderness Girls closer together in the movie.

So, I'm giving Forest Bathing a thumbs up because at the very least it makes you nostalgic for simpler times. That Thoreau was onto something...

Visit gracehotels.com/mayflower to book; Rates start at $80 per person for the Forest Bathing experience.