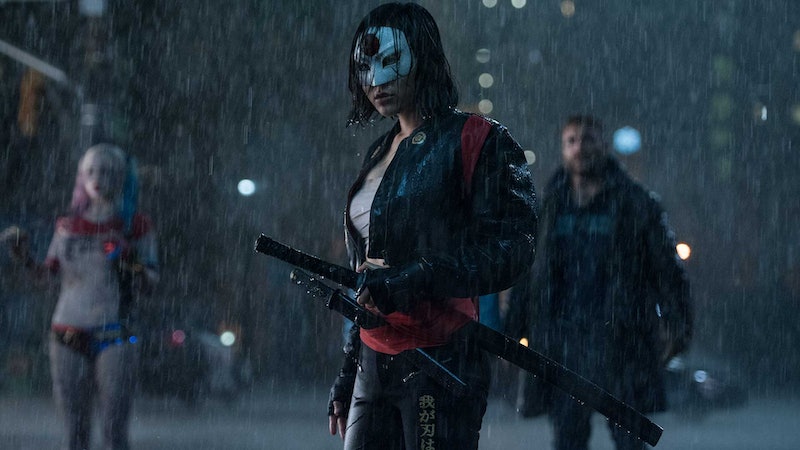 The superhero movies of 2016 have a common theme: They all have insane amounts of characters. Batman v Superman, Captain America: Civil War, X-Men: Apocalypse... every single one of these movies had more heroes and villains than the one that preceded it, but the biggest is still to come. Suicide Squad hits theaters on August 5 with a crazy amount of characters; almost all of whom have never appeared in a movie before. There's fan favorites like Deadshot and Harley Quinn, notable villains such as Killer Croc and Captain Boomerang, and even a kickass Samurai warrior. Speaking of the latter, who is Katana in Suicide Squad?

Katana, portrayed by Karen Fukuhara in her first onscreen role, is not technically a member of the squad. While the Suicide Squad is made up of a group of villains who have been implanted with explosive devices to keep them in line, they're led by a good guy: U.S. soldier Rick Flag. That's where Katana comes in. As further protection against the maniacs Flag finds himself commanding, Katana functions as his personal bodyguard. And she makes for a pretty effective protector, given that not only is she a deadly Samurai assassin and swordswoman, but her blade, Soultaker, is also magical and can trap the souls of its victims.

Katana's real name is Tatsu Yamashiro, and in the comics she is a widow who trained to become a samurai after her husband was killed by criminals (she can also communicate with her husband via Soultaker). She also, unlike most of the "heroes" in the movie, is a bonafide good guy; having even been a member of the Justice League in the comics. Fukuhara talked about how important this aspect was to her, playing an Asian female superhero, in an interview with Playboy:

“As a first-generation Japanese American, I’ve always wanted to play a samurai warrior like my Suicide Squad character, Katana. Samurai are almost always male, so growing up in America I had a hard time figuring out role models. Katana and I may not have the same personality, but coming from the same cultural upbringing, we share core values. In Japanese culture there’s this idea of putting others before yourself, but I’ve also never wanted to let myself down. Someone recently told me how refreshing it is to see an Asian woman as a superhero. That stuck with me. Stand up for yourself and what you love.”

So not only is Katana the most heroic — and perhaps deadliest — member of the Suicide Squad, but she's also breaking down some serious barriers for both women and minorities in film. I think I might have a new favorite superhero.