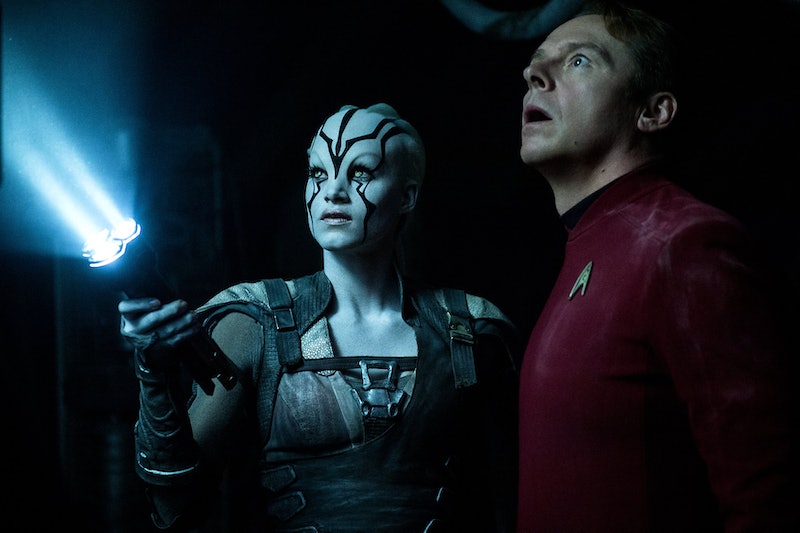 Now three-deep, the current theatrical Star Trek reboot series has the luxury of an established story and characters. It's a freedom that Star Trek Beyond revels in, mixing up Enterprise crewmates into fun, unexpected groupings for the bulk of the film. (Kirk and Spock are certified BFFs for life, whether they spend all their scenes together or not. You know it, and I know it.) It's those mash-ups that breathe new life into the franchise in this movie, along with the introduction of a new ally equipped with bravery, applicable skills, and great taste in music. Sofia Boutella plays Jaylah in Star Trek Beyond; she's another victim stranded by Krall's hunger for destruction. Trained as they are, the Starfleet officers I know and love would have been lost without her help. This character definitely isn't human, and her look is unique. But just what kind of alien is Jaylah? Spoilers ahead.

Though Jaylah speaks about her family, she does not reveal the name of her race or her planet of origin to "Montgomery Scotty" or any other member of the Enterprise crew. All she says is that her family was held captive by Krall and his minions on Altamid. They made an attempt to escape and Jaylah's father sacrificed himself so that Jaylah could get away. She's been living off the land ever since. Star Trek Beyond also doesn't give a sense of the timeline between Jaylah's escape and Krall's attack on the Enterprise. But I would reckon at least several months, considering the work she managed to complete on a long-abandoned, ancient Starfleet ship.

In a movie where Spock is a Vulcan who falls in love and forms other strong, emotional attachments, perhaps it's a mistake to assume that Jaylah shares all of her personal characteristics with the rest of her race. She's an individual, as much as any of the humans and other aliens in that universe are individuals. But it's possible that her engineering talents are in part learned from a strong technical tradition and the rest developed in practice and out of necessity. Obviously, Jaylah grew up in a loving family with strong ties, so that's a clue. And though the movie doesn't tell us where they were going and what they were doing when they were intercepted by Krall, it's fair to assume that Jaylah's race are travelers. She shares their wanderlust.

What I know for sure is that Jaylah is a type of alien who has not appeared in any Star Trek property before. In an interview with SFX magazine (as reported by MoviePilot.com), co-writer and Scotty actor Simon Pegg announced that Star Trek Beyond would feature 50 new types of aliens (including Jaylah) in honor of Star Trek's 50 year anniversary. My hope is that the rest of Jaylah's backstory including the name of her alien race is being saved for the announced Star Trek 4 . After all, she's already been accepted to Starfleet Academy. And with her resourcefulness, technical know-how, and practical combat experience, Jaylah ought to sail right through to graduation.