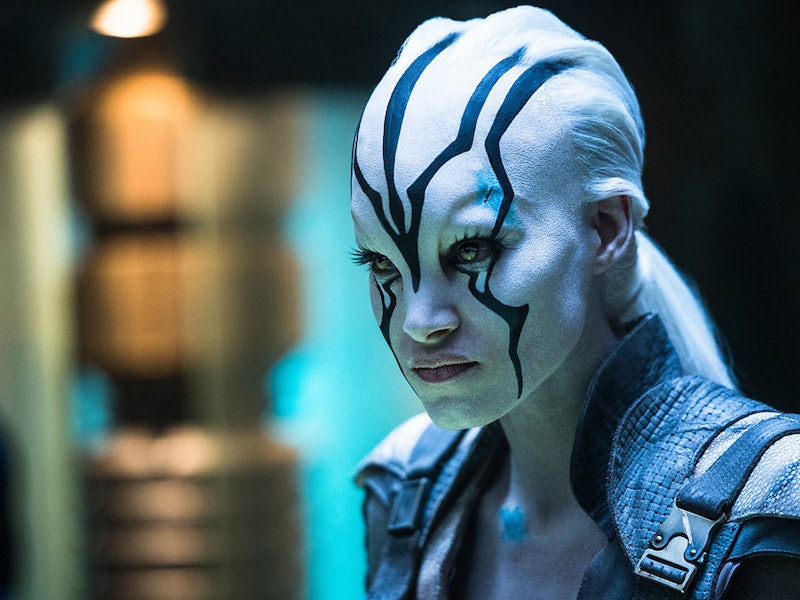 The new Star Trek movie, Star Trek Beyond, not only brings back the bulk of the cast from the first two films of the rebooted Star Trek universe, it also introduces a couple of new and intriguing characters. One is the new villain Krall, portrayed by Idris Elba, and the other is the awesome-looking, scene-stealing, ass-kicking Jaylah. Given her extensive makeup (and rad hairstyle), it's not immediately clear who plays Jaylah in Star Trek Beyond , as the actor behind the character hasn't received nearly as much press leading up to the film as Elba has. So what's her deal?

In Star Trek Beyond , Sofia Boutella portrays Jaylah. If you don't know that name, you will soon, as the actor is poised to become a huge star. Jaylah is the breakout character of the film in many ways, which isn't too surprising given that her conception was inspired by the fiercely independent performance of one of the world's biggest stars, Jennifer Lawrence, in Winter's Bone . And although Boutella hasn't reached J-Law's level of star power just yet, she's well on her way. Before Star Trek , the 34-year-old Algerian dancer and actress showcased her moves in her breakout role as blade-footed assassin Gazelle in 2014's Kingsman: The Secret Service .

Her Kingsman role put her on the map as a highly in-demand action star; a reputation that will continue to grow following her performance in Star Trek Beyond . But the space adventure is hardly the only upcoming project for the busy actress. Here are three more upcoming films that are bound to make Sofia Boutella a household name.

Boutella's next film is probably her most-anticipated, as she portrays the titular villain in this reboot of Universal's classic monster franchise. The movie, which also stars Tom Cruise, is the first in a series of monster movies that will set up a cinematic monster universe as Universal's answer to Disney and Marvel. The film hits theaters on June 8, 2017.

Although it doesn't delve into sci-fi or fantasy like Boutella's other recent films, that doesn't make this actioner any less thrilling, as she returns to the spy genre. Her role hasn't been revealed, but the plot revolves around an MI6 agent (Charlize Theron) who is tasked with taking down a spy ring in Berlin on the eve of the Berlin Wall coming down. James McAvoy and John Goodman round out the all-star cast. The movie will be released on August 11, 2017.

Boutella's will star in this sci-fi thriller alongside Deadpool 's Ed Skrein and The Amazing Spider-Man 's Rhys Ifans as a soldier at a deserted military outpost in a post-apocalyptic world. No release date has yet been set for the film.

So if you still don't know Sofia Boutella's name, give it a year. Then you won't be able to remember a time when she wasn't in seemingly every action movie coming out.