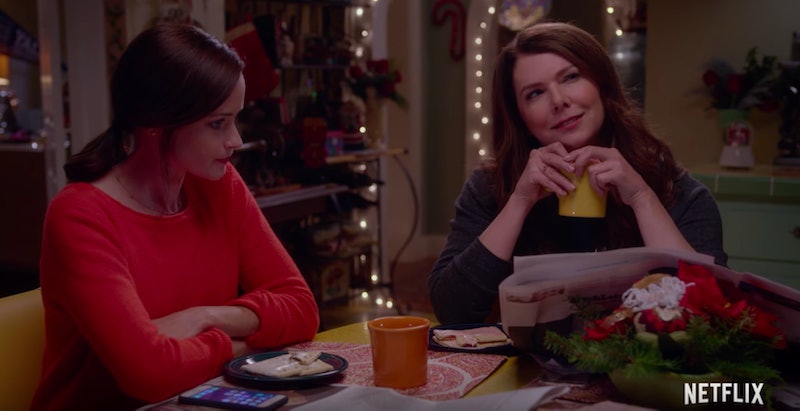 Where you lead, I will follow. That statement couldn't be more true when the "you" refers to Gilmore Girls, and, this time, fans are following the original WB series to a whole new home: Netflix. The series that made even the most devout city slickers wish they grew up in a small town is headed back to our small screens, this time with a Netflix revival set years after the show's series finale on The CW in 2007. Rumors and spoilers about the Gilmore Girls revival have swirled ever since the return of the show was officially announced in October of 2015. Though fans of the series have speculated everything from whether Lorelai and Luke will have another kid to who Rory will be with in the new series, we may have our answer to one huge question. The new Gilmore Girls revival trailer hints that "Winter" will be the show's first episode, and it's not the only piece of evidence we have.

Fans of the original series likely freaked out when they watched Netflix's new trailer, which features gorgeous images of Stars Hollow and a classic Gilmore gal chat session at the Gilmore's kitchen table. Though the big topic of conversation was whether Amy Schumer would like Lorelai (umm, despite what Rory says, how could she not?!), it was hard not to notice one big clue about the potential first episode of the series. See if you can spot it in the trailer below:

Notice the Christmas lights and red and green decor in the Gilmore household? That seemingly suggests that this scene comes from the "Winter" episode of Gilmore Girls, which might mean that the first episode we'll see in the series is one that takes place around the holiday season. We already know that each 90-minute episode of the Gilmore Girls revival will be named after the four seasons, and since it's likely that the show used a clip from the first episode for their trailer, it makes sense that "Winter" is the starting point for the series.

Eagle-eyed fans were seemingly correct about the first episode being "Winter." According to Us Weekly editor Ryan Gajewski, the first two minutes of the first episode were screened at the TCA, and — you guessed it! — it began with a Stars Hollow winter:

Of course, it's not the only clue that we've received about "Winter" being the first episode in the revival, even before the episode was revealed. The Gilmore Girls theme song, "Where You Lead" is by Carole King, and another famous song by King "You've Got A Friend" may be what the series is referencing with the episode titles. "You've Got A Friend" goes "Winter, spring, summer or fall," something that the Netflix trailer actually includes — could it be a King reference?

I'm stoked about this new Gilmore Girls development — who doesn't love the idea of kicking things off with a holiday episode?