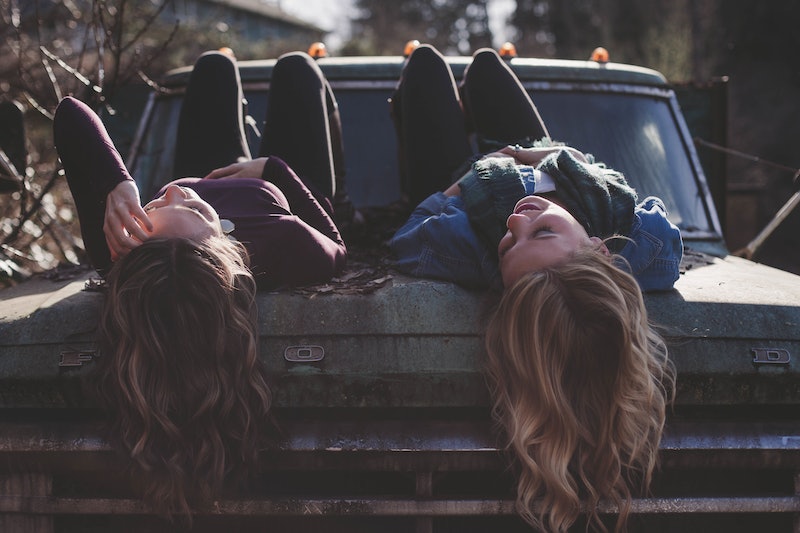 I’m 29; I’m in a long-term romantic relationship; I’ve been living mostly abroad for the past five years, and, recently, I’ve been really, really lonely. But I realized after a particularly isolated few months in Vietnam — where I was in an opposite timezone to my family and friends back home — that there was no reason I had to feel so lonely and isolated. I have amazing friends quite literally all over the world and just because we weren’t in the same country (or timezone or even continent) didn’t mean we couldn’t be in each other’s lives. And so I made the commitment and started consciously reaching out to old friends.

I started easy, with the two women I’ve called my best friends since high school. We met up in Manhattan — which was a minor miracle considering we live on three different continents — and I say “easy” because they’re my oldest friends but other than immediate familiarity, it was really, really hard. Despite the fact that these were two women who I love and who I know love me, opening up to them about what had been going on in my life, including some really hard stuff about my relationship, was terrifying. I stood in a dark bar with them, took a deep breath, and dove in.

After that, reaching out got a little bit easier. I made a list of friends who were important to me and am consciously making the effort to pick up the phone and call. Sometimes people are available, sometimes they’re not, but when I do catch someone, the conversations we have inevitably make my day better. And for someone who struggles with anxiety and a sometimes crippling perfectionism, it feels amazing to reminded that a) other people think I’m awesome and, b) they still think I’m awesome when I’m not “perfect.”

So this is my thing right now: Reaching out to old friends. Here are seven reasons why you should consider it too.

My personal observations suggest that most people stop making new friends after their mid-twenties. After studying peer groups, Laura L. Carstensen, a psychology professor and director of the Stanford Center on Longevity in California, found that people were more likely to interact with fewer people as they moved toward midlife.

It totally makes sense — as careers and kids and significant others take up more and more of our time, making new friends becomes less and less of a priority. But that doesn’t mean you don’t need friends! It just means that old friends might be a good bet — making friends as an adult is stupid hard.

2. Being An Adult Is Lonely AF

I grew up in a big family in a house that was always full of kids, whether they were my siblings or my siblings' friends. Going from that to adulthood — where you’re kind of expected to live on your own and be independent and, if you’re a small town kid with ambitions, move away from your hometown — was incredibly lonely. I’ve realized, though, that independence does not have to mean “without the people who love you,” so if you’ve made the same mistake that I did and neglected those older relationships, take this opportunity to reach out again. You won’t regret it — and you’ll definitely feel less lonely.

3. If You’re Coupled, Your S.O. Can’t Be Everything

I’m absolutely the person who expects my significant other to be my “everything” — lover, best friend, companion, bed warmer — even though I know that’s not a healthy way to be in a relationship. (I’m working on it.) So I totally get the impulse to have your partner be your entire social life. However, it’s not good for them, for you, or for the prospect of relationship longevity. Reaching out to old friends is a good way to take some of that pressure off of your significant other.

4. It’s A Good Reminder Of How Great You Are

Look, nothing is a better ego boost than talking with an old friend who really loves you. One thing that always surprises me when I reach out to someone I haven’t spoken to in a long time is the little comments that reveal how they truly see me. So, for example, my amazing friend Allie told my boyfriend that he should feel privileged to be with me because she’d seen me turn down lots of dudes who wanted to be my boyfriend when we lived together in Argentina. My impression of that time was that I was just floundering around like the very, very lost human I was, but her impression was of a self-possessed woman who knew what she wanted. It felt great to hear it and was a good reminder of who I believe I am at my core. (Thanks, Allie.)

5. You Might Discover Some New Things You Love About Them

I recently hung out with a woman I hadn’t seen or talk to in at least a decade. We were on again/off again friends in high school and had a falling out in our late teens (over a boy, of course) and I think both of us finally realized that it was time to let bygones be bygones. When we saw each other, it was immediately apparent how much she’d grown since I’d seen her last and, in general, it just felt nice. It was really, really cool to see her transformed into the potential person that I glimpsed when we were teens.

6. You Can’t Have Too Many Friends

But for real though.

7. It’s An Opportunity To Be Vulnerable