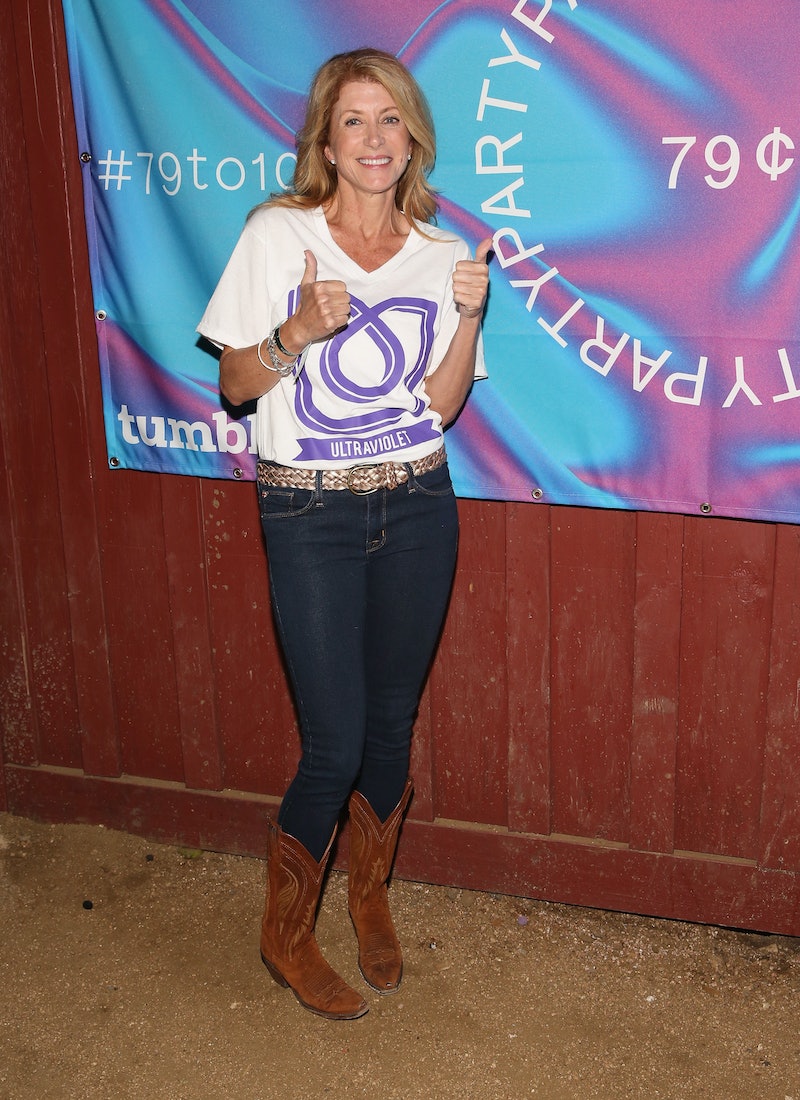 At the Independence Mall during the third day of the Democratic National Convention in Philadelphia, Wendy Davis opens up to Bustle about Donald Trump's harmful rhetoric on women's rights and reproductive health, why Tim Kaine is a great vice president choice, and about passionate Bernie or Bust supporters and what they need to know about the Democratic Party. Davis, of course, gained national recognition when she shouldered a 13-hour long filibuster to block Senate Bill 5, a measure which further curtailed abortion regulations in Texas.

Since then, Davis launched her own women's rights nonprofit, Deeds Not Words, focusing on equality and reproductive health. Davis, as an ardent advocate for greater reproductive autonomy, is not having any of Donald Trump's misogynistic dialogue.

"Our reproductive autonomies are literally at risk and I know we just won an important Supreme Court victory that overturned that Texas law that I filibustered a few years ago," she tells Bustle in a Facebook Live interview. "But we are still at a very precarious point." Davis points out that there remain state legislatures in the country today that, in spite of the Supreme Court decision, are going to continue to "assault our reproductive autonomy."

Another threat to women's rights and reproductive health, Davis tells Bustle, is Trump.

"We have Donald Trump saying he's going to defund Planned Parenthood, saying women who have abortions should be punished and saying he will make a litmus test for a Supreme Court appointment — someone who will overturn Roe v. Wade," Davis continues, listing off some the many ways a Trump presidency would negatively impact women. To the claim that Trump is actually good for women, she simply responds, "That is absurd."

Since his announcement to run for president, Trump's ratings with women have not been favorable. In March, a video produced by conservative anti-Trump group Our Principles PAC showed women read aloud comments the Republican nominee has made about women. Ranging from phrases such as "bimbo," "dog," and "fat pig" to "That must be a pretty picture, you dropping to your knees," the video effectively galvanized a conversation around women voters and Trump.

Addressing the Bernie or Bust supporters, Davis urges them "to embrace, to own and to feel a tremendous amount of pride in the changes that they each, individually and collectively, as a movement have had ... They moved the platform."

But according to a March poll released by ABC News, Trump's constant insistence that he is doing “very well” with women voters might actually ring true — somewhat. According to ABC News polling data from March, in the middle of the primaries, Trump had won the largest percentage of women in 11 out of 15 states. His daughter, Ivanka Trump, certainly thinks he is an appropriate choice for women voters as she championed him as a supporter of equal rights in her RNC speech.

Davis' concerns are twofold: Not only do we need to elect a "champion" to further the fight for reproductive autonomy and general women's rights, but we also need to continue to move the Democratic progressive platform forward, despite the wake of inner party politics and controversy. For Davis, Hillary Clinton is most definitely that champion, as she "has been supportive of all things reproductive rights," she tells Bustle.

Addressing Bernie Sanders' supporters, who are no doubt disappointed after their candidate's emotional concession Tuesday, Davis urges them "to embrace, to own and to feel a tremendous amount of pride in the changes that they each, individually and collectively, as a movement have had ... They moved the platform."

Sanders supporters have been grappling with not only the email leak but also Clinton's VP pick: Tim Kaine. Many view him as too centrist and moderate, which has only justified the Bernie or Bust supporters in either choosing not to vote or vote outside of the Democratic party altogether. Davis applauds Clinton's VP choice though, telling Bustle that while Kaine does not personally support abortion, "but his record in public service has always been one of supporting women's right to choose what we will do with our own bodies."

In an election that has been emotionally charged since the very beginning, Davis has a plea to Bernie or Bust supporters: "Please do not exit the conversation because of disappointment."