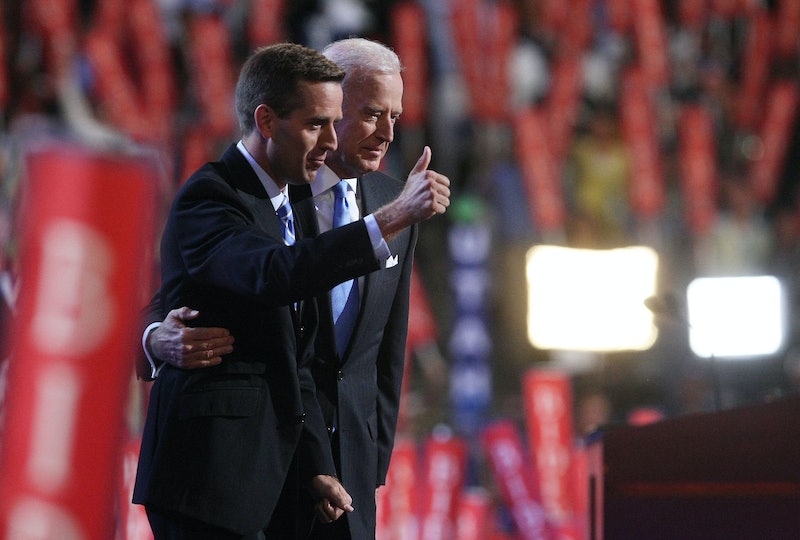 In October 2015, Vice President Joe Biden announced that he would not be running for president. This was a difficult moment in a series of difficult moments for Biden, who made this decision because he and his family needed more time to grieve the death of his son, Beau Biden. So on Wednesday night at the Democratic National Convention, Biden paid tribute to Beau.

Biden has wondered what would have happened had he run, but ultimately — as he explained to Stephen Colbert last fall — people should not run for president unless they can commit their "whole heart" to the job. He didn't think he could do that after Beau died in May 2015 at the age of 46 after a battle with brain cancer. Following his death, his father said in a statement that "Beau Biden was, quite simply, the finest man any of us have ever known."

Ahead of Biden's speech on Wednesday, a video introducing him and his legacy featured the vice president's fight to improve cancer treatment. "It's personal," Biden said in the video, as a picture of him and Beau hugging came up on the screen. "Like many of you I've experienced in my family a dreaded c-word. ... We are going to fundamentally change the face of cancer."

A Democrat like his father, Beau was a prosecutor in the U.S. attorney's office in Philadelphia for nine years before serving as Delaware's attorney general for two terms, and he was preparing for a run for governor in 2014. Beau served as attorney general even as he was seeking medical treatment in 2010 and 2013. When Beau was just two years old, he survived a car crash that killed his sister Naomi and his mother Neilia, Biden's first wife. In 2008, Beau was deployed to Iraq as a captain in the Delaware Army National Guard. On Wednesday, Biden honored his son — who introduced him at the 2008 DNC — and thanked his family and convention attendees for their support.

In 2008, when he was about to deploy to Iraq and again in 2012, our son Beau introduced me to the country and placed my name in nomination.

You got a glimpse — I know I sound like a dad but you got a glimpse of what an incredibly fine young man Beau was. And his two kids are here tonight. As Ernest Hemingway once wrote, "The world breaks everyone and afterwards, many are strong at the broken places."