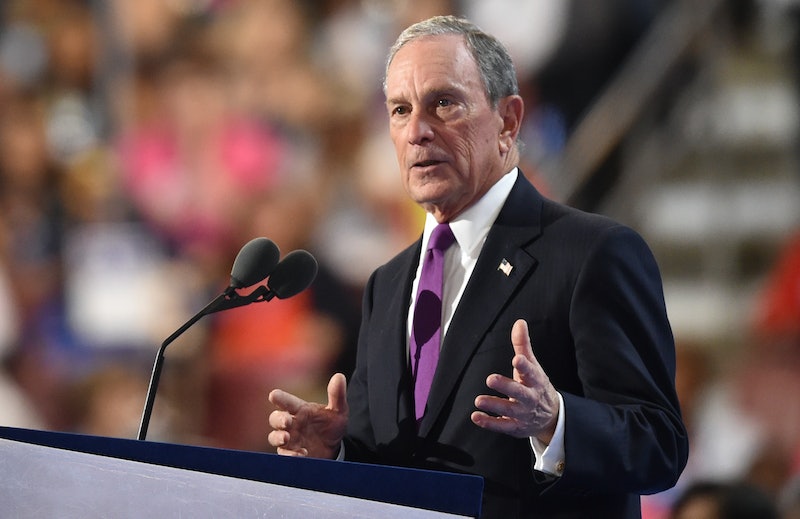 At the Democratic National Convention, nearly every speaker has enthusiastically thrown support behind the officially elected presidential nominee Hillary Clinton. However, convincing "Bernie or Bust" backers has proven to be a tricky task of its own. Alongside comedian and former Bernie Sanders activist Sarah Silverman's plea to unite under Clinton, former Mayor of New York City Michael Bloomberg's DNC speech appealed to Sanders supporters directly on Wednesday evening. As an independent politician himself, he can relate to being largely unsatisfied by the political options at hand.

"I know what it's like to have neither party represent my views or values," Bloomberg told the audience. But the self-described "outsider here to deliver what will be an unconventional convention speech" kept it plain and simple: Trump must be defeated. For Bloomberg, that makes his decision this November crystal clear. Though the former mayor has refused to endorse any political party or platform as a whole, he said that he's on stage to convince voters to support Clinton, even if they disagree with her on certain fronts. He certainly has his own objections, he admitted.

And we must unite around the candidate who can defeat a dangerous demagogue. I believe it's the duty of all American citizens to make our voices heard by voting in this election.

And he definitely doesn't support sitting this election out either. Voting is a responsibility. He encouraged audience members to hop online and register to vote in November.

Bloomberg has an interesting political history. In February, the former mayor hinted to the Financial Times that he would consider running for president as an independent, because according to him, neither Trump nor Clinton were representing moderate American voters adequately. The same rumors circulated in 2008 and 2012. However, Bloomberg hasn't always been an independent. In reality, he's witnessed the inner-workings of both parties firsthand. That being said, his endorsement of Clinton wasn't entirely expected.

Prior to running for mayoral office in 2001, Bloomberg identified as a Democrat before deciding to switch allegiances and become a member of the Republican Party. Retracing his steps, he pulled out of the Republican Party in 2007 and has identified as an independent since. In hindsight, his political transitions indicate the remarkable extent to which each party has changed over the past decade. Most significantly, those changes have come to be represented by two polar opposite parties that may have a difficult time appealing to the middle ground in the future. But if the Democratic Party wants to convince independents to vote for Clinton, Bloomberg's appeal may have been the strongest yet.