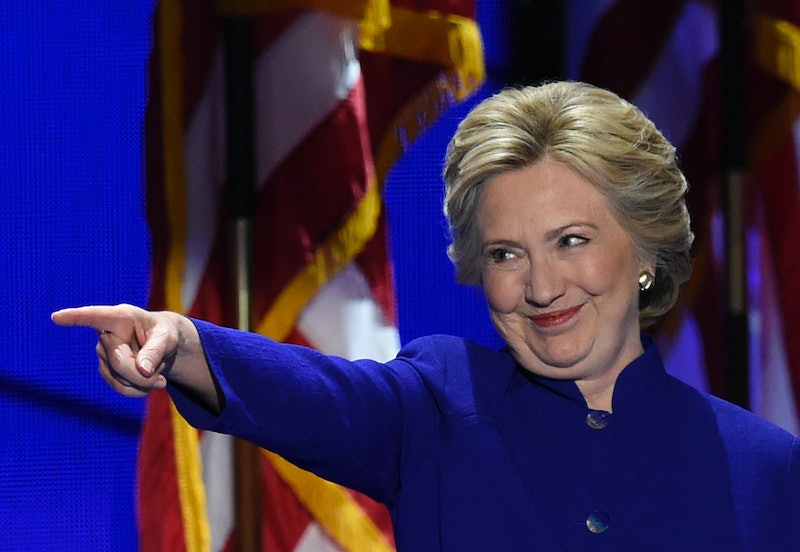 The final day of the Democratic National Convention has finally arrived, and there are high expectations for official Democratic presidential nominee Hillary Clinton's speech. Eight years ago, she stood on the convention stage admitting defeat and endorsing Barack Obama. Now, the president is standing behind her. In anticipation of her historic address, this DNC fact could foretell how long Clinton's speech will be. Either that, or it's a really eerie coincidence that I don't know how to explain.

As the clock struck midnight early Thursday morning, Amie Parnes, The Hill's White House correspondent, pointed out that Obama's speech was 44 minutes long and that Bill Clinton's address was 42 minutes long. Why does that matter? The numbers certainly don't ring a bell — at least, not right away. However, they hint that the nominee's official address will last for exactly 45 minutes. And there's some clever reasoning behind that conjecture.

In the course of history, Obama was the nation's 44th president, and Bill Clinton was the 42nd. Coincidentally — or totally not — the duration of their speeches lined up precisely with those numbers. If that was intentional, it might just be the coolest thing a convention committee has ever planned. So get ready to pull out your stopwatches, because Clinton is clearly planning on becoming the 45th president of the United States.

Though Clinton's speech will be her first big address since the convention kicked off Monday, it won't be the first time she's appeared in Philadelphia's Wells Fargo Center this week. After Obama finished his address — both a farewell to the nation and an energetic endorsement of Clinton — on Wednesday evening, the former secretary of state made a surprise appearance on stage, sending the audience into a cheering frenzy. As they embraced each other and exchanged words, it became clear that Obama was passing the baton on to an old friend.

If this theory is true, it will have been one of the more positive ones to come to fruition during the DNC. On Friday, WikiLeaks released thousands of emails sent between Democratic National Committee members, some of which alleged the committee had favored Clinton over Bernie Sanders throughout the primary campaign. Though the leak lent credence to Sanders supporters' longstanding claim that the system was working against their candidate, the Vermont senator stuck with Clinton, and urged his supporters to do the same. It's safe to say that the theory on the length of Clinton's speech is a little bit more lighthearted. And if it proves to be true, expect social media to completely lose it.