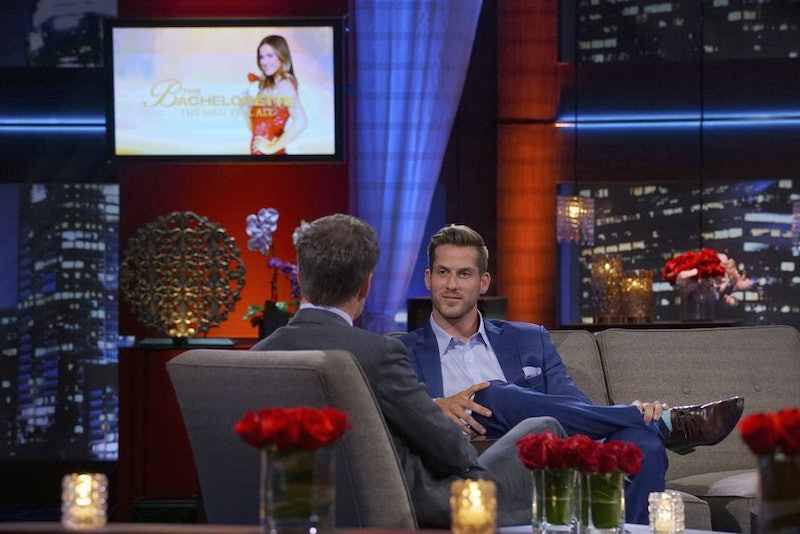 As a massive Bachelorette fan, I have dedicated a lot of time recently to trying to figure out who JoJo Fletcher will choose during next week's season finale. But even so, there's a bigger question on my mind, too: Who will be the next Bachelor? While the news wasn't announced on Men Tell All — no surprise there — it does seem like ABC is a bit closer to making their final decision. In an interview with Entertainment Tonight, Chase McNary revealed that he's in talks to become the next Bachelor . But whether you're disappointed or excited by this news, don't get too excited just yet. This early in the game, anything can happen — and I'm not convinced he would be the best person for the job, anyway.

That being said, it definitely sounds like Chase is in the running. As he told ET, "the discussions are there. But it's just — I don't know. There's a lot of weight there." Um, yeah, ya think?! As much fun as dating 25 women might sound, taking on that role comes with a lot of pressure... and a lot of eyes on you. It's hard to blame Chase for being hesitant about it, because once you're The Bachelor, prepare to have your relationships scrutinized for life.

And when it comes to deciding who would be capable of it, I just don't think Chase is the right choice. What really rubs me the wrong way about him is the way he acted during his Fantasy Suite date with JoJo — you know, when he actually got angry for being asked to leave the suite before they had the chance to have private time, sans cameras, as if it was something that was owed to him. Not cool, even though he did come back and apologize. And other than that moment, he wasn't a very memorable contestant (probably because who had time to think about anybody other than Chad?).

When it came down to it, Chase was kind of a boring dude all season long, even during his dates, so could he really carry an entire season of his own and manage to hold our attention the entire time? I don't find myself caring if he finds love in this post-JoJo world he's living in, and that's kind of necessary to keep viewers into The Bachelor next year. And honestly, if the producers do end up choosing someone from this season, I'd rather it be Luke, who said in the same ET interview that there's a "possibility" he could end up with the gig.

And if you feel the same way as I do, don't worry. Chase is obviously not the only guy ABC is considering. Anything could happen at this point! To Chase's credit, though, his appearance on Men Tell All did seem to be his way of gunning for the job — and it totally worked. The live audience seemed to eat it right up, which is exactly what you want when you're trying to figure out who makes a good leading man.

So who will it be? Chase? Luke? A mysterious third option that no one saw coming (which is what I'm hoping for)? Fingers crossed we find out soon. ABC, don't hold out on us!

More like this
What’s New On Netflix: A Victoria Justice Rom-Com & The Return Of David Letterman
By Arya Roshanian
Twitter Is Upset About The 'American Idol' Top 3 Results: "Who TF Is Voting?"
By Jake Viswanath
Stormi Just Walked A Red Carpet With Mommy Kylie Jenner & Daddy Travis Scott
By Hugh McIntyre
Everything We Know About Chèrie & Jessey’s Abrupt Exit From Bling Empire
By Alyssa Lapid
Get Even More From Bustle — Sign Up For The Newsletter