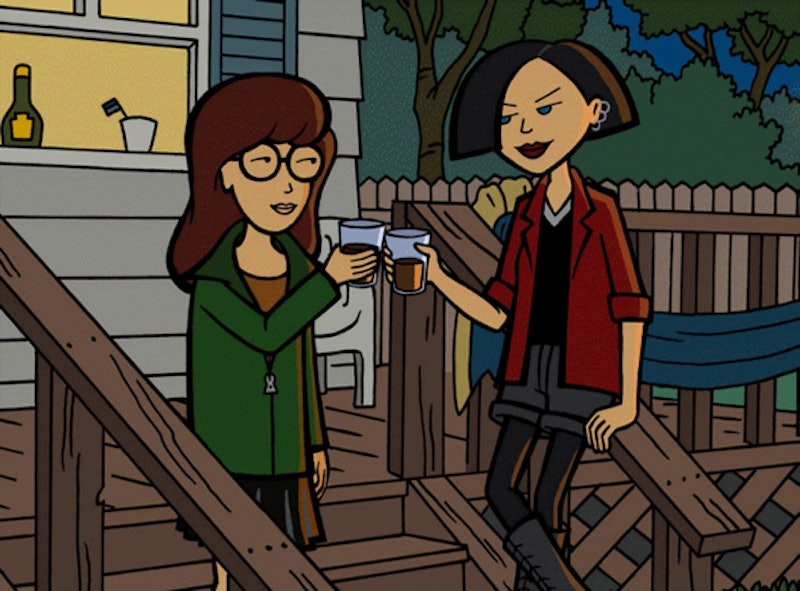 The phrase "Christmas in July" just got new meaning for me, because VH1 Classic will be rebranding as MTV Classic and bringing back '90s MTV shows all the time. I'm inches away from throwing open my window right now and sticking my head out to ask the nearest young boy to bring me a Christmas ham and to marvel that the spirits have done it all in one night. Not only will shows like Daria, Beavis & Butt-head, Pimp My Ride, Cribs, Jackass, and Punk’d be making a much-deserved resurgence on the channel, but the whole vibe of of the channel overall will be in throwback mode as well. From what's being described, it sounds like MTV Classic will be a nice little time capsule, frozen in amber for us to come and gaze at. Kind of like when Nickelodeon launched The Splat, but for MTV shows.

Starting on Aug. 1, 35 years after its original premiere, MTV Classic will air MTV Hour One, which — as the name suggests — is the first hour of television that ever aired on MTV in 1981. Why bother getting out of your apartment to go to a museum when one will be streaming to your television for just the price of cable? (Which, now that I'm thinking of it, is actually higher than the cost of a trip to a museum. But no matter.)

After the re-airing of that iconic hour, MTV Classic will be moving into a full-on walk down memory lane, with The TRL Decade, which takes a look at all the years of that old chestnut Total Request Live. And it doesn't stop with that first day of airing; MTV Classic will devote different days and time blocks to all the varieties of programming that they used to have on offer. For example, primetime blocks will be mostly given over to animated classics like Daria , classic reality shows will air Monday through Thursdays during the late-night hours, and Fridays will be dedicated to music shows, with the airing of the best-of MTV Unplugged, including some episodes that haven't seen the light of day in years.

It's like MTV decided to air out an old house we haven't been through in years, shaking out the carpets, throwing open the windows, and just generally letting the sunshine of our love spruce up all these old rooms that we remember like the back of our hands, but haven't seen since we were kids. I'm so desperately trying to be chill and whatever about this, because I know it's what Daria would want, but every part of me is jumping for joy and excitement right now, because this is the best. News. Ever.

August 1 can't come soon enough, if you ask me.